WHERE IS THIS BEING PLAYED

WHERE IS THIS BEING PLAYED 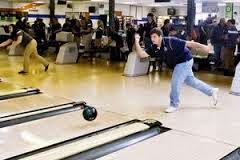 Why do women always have to know where a sporting event is being played?  A woman walks in the room while a game of any sport is on the TV and they always ask,


“Where is this being played?”


Generally as soon as a woman finds out where the game is being played she asks two more questions and then just walks out of the room.


I used to think women wanted to know so they could see what the weather was like in another part of the country.  Apparently that is not true because they will also ask at a basketball game.   They can’t learn anything about the weather in an indoor venue.


Then I thought, maybe they want to know which team is the home team, even though they usually don’t know who is playing;  that is their  second question, followed by who is wearing the blue uniforms.  Then they leave the room.


Recently I was watching a bowling tournament (don’t judge, there is nothing else but meaningless basketball games and figure skating this time of the year) and Mrs. C asked me,


“Where is this being played?”


“I don’t know where it is being played.  What is the difference?  You can’t tell anything about the weather, and there is no home team…it’s bowling.”


Now comes the kind of woman’s response that forever has me scratching my head:


“You never know, I might see someone in the crowd that I know.”


“Depending where the match is being played, I might know someone who is watching… and it drives me crazy that you don’t even know where they are.”


“This is bowling, there are about 75 people watching, there is no crowd,” and why is it so important to know where these bowling lanes are? They throw a ball at a bunch of pins, do you think they have to factor in the humidity and stuff.”


Hint: The name of the team is on their jerseys, the logo on the field will tell you where the game is being played, the blue team will have their name on the shirts, and if it is bowling,