I seldom answer a phone call from someone I do not know.  We have a land line which will display a caller number or ID.  My cell only rings for numbers in my contact list, if it is important, I will see a message.

Occasionally I will pick up on an unknown entity.  It gives me a chance to yell at a stranger.  I know it won’t stop these asshats from calling, but it sometimes just feels good.

Today the land line rang and I felt the need to yell at someone.

“Razzafrast.” (I never answer hello, I try to catch them off guard with a mumble.)

“Hi, this is your Congressman, Frank Malone.  Tomorrow I will be voting in favor of the Presidents bill to end inflation and climate change, boost the economy and ensure our Democracy will not be dismantled.  Please hold on to answer our constituents survey on this historic bill. “

I was not sure why he would be taking a survey on a bill that he has already said he is voting in favor of, but as he wanted my opinion, I hung on, even though I don’t know enough about the bill to give an educated opinion.

“Thank you for waiting:

Press one if you believe this bill will stop inflation.

Press two if you believe this bill will stop climate change.

Press three if you believe this bill will add jobs to the economy.

Press four if you believe this bill will save our democracy. *

Press five for something else.”

Well, that is a bull shit survey!

I’m sure I will read somewhere that 40% of Mr. Malone’s constituents believe this bill will end inflation, 30% believe it will end climate change, 15% believe it will add jobs, 10% think it will save our democracy, and 5% are too stupid to have a real opinion.

I decided to cast my opinion by hanging up on this important, informative survey.

Later tonight, Mrs. C chastised me for not taking out the garbage last night.

“You should have taken the garbage out last night; it is beginning to stink up the garage!”

“Let me ask you a question:

Did I not take out the garbage last night because

Press one for My wife did not remind me.

Press two for I should have been reminded by my wife.

Press three for It is the wife’s job to nag her husband about the garbage.

Press four for no one reminded your husband about the garbage.

Press five for something else.”

She hung up on me!

*I will save the one asshat the lecture and interject here that we have a representative republic, not a democracy…I don’t know the difference either but someone always has to point this out to me.  And by the way, democracy was congressman Malone’s word, not mine.

My daughter just informed me they named their new outboard fishing boat "Valkyrie," something about a Germanic chooser of the slain who guided the souls of deceased soldiers.  As her husband is a West Point grad who served several years for our country, it seems an appropriate name.  It did remind me of this post from 2011.
a very old Cranky re-run
I passed a car the other day that was towing a 28’ cabin cruiser named “You Only Live Once.”  What were they thinking?  I know it is a cute name and sure to get a few laughs along the waterway, but why not put in big lettering under the name I AM NOT A SAILOR!
Boat names should not be cute.  They should honor a loved one (preferably a lady) or perhaps tell something about the owner.  Growing up there were several boats in our family.  My Grandfather ran a business processing waste fabrics into polishing cloths and industrial wiping rags.  His boat was named “ETSAW” (WASTE backwards).  My uncle worked in the business; he owned a boat named “Rags”.  My brother, his wife and their three children all graduated from Duke University in North Carolina.  Their boat is the “Blue Devil.”
My parents named their small cruiser after my Mother’s favorite aunt, “Mable H.”  Dad had a small crabbing boat on the Eastern Shore Maryland named the “Crab Ali” after Alison his first granddaughter. He named an eight foot sailing dink “The Merry Bee”, after Mary Beth, his other granddaughter.
Cute names like “Momma’s Mink”, “Dad’s Cad” and so on are good for a quick laugh, but nautical they are not!
One thing to consider when naming a boat is how a distress call to the Coast Guard will sound: 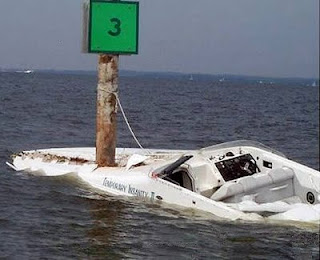