MY SON THE SCAVENGER - a cranky re-run

MY SON THE SCAVENGER 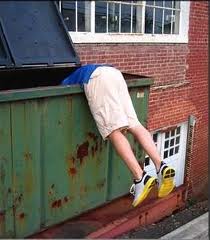 This weeks cranky re-run is from February 2012


My middle child, if you can have a middle out of four, is a scavenger.  He is not a hoarder; he knows how to sell stuff or to throw it away.  He just can’t pass by anything that someone is trying to throw away if it appears to have value.


While other parents demand brand new toys for their children, The Scavenger has no problem rehabilitating broken or old toys that neighborhood children have outgrown.  It has now reached a point that neighbors don’t throw toys away without first checking with the Scavenger.  The Crankettes have bikes, trikes, plastic tables, wagons and construction toys of all kinds; all rescued from the dumpster.  They even have a giant wooden swing set that was outgrown by the neighbors.


The Scavenger has rescued and sold carpets.  He has a basement full of tools and ladders that were all previously unwanted.  He passes slowly by neighborhood homes on pick-up day, eyes peeled for unwanted treasure.


On the way to work one morning, the Scavenger passed a wrought iron bench with wooden slats that was left close to the curb.  He had just the place in his yard for such a nice piece.  He could not believe someone would throw out such a bench.  He had seen similar benches at Home Depot for over $150.  On the way home he saw the bench was still out by the curb.


The next day he again passed the bench and vowed if it was not picked up by the time he returned home he would save it from the garbage truck hopper.  On his trip home, sure enough, the bench was right by the curb, unwanted and unloved.  The Scavenger would give it a proper home.  He pulled his car over, popped the trunk, and proceeded with much difficulty to load the bench in the trunk, carefully tying the trunk lid down over the bench as the bench was too big to allow the trunk to be closed.  When the Scavenger was about to pull happily away he was called out by a very aggravated lady.


“Hey you, what the hell do you think you are doing?”


“Ah…er…I was just going to take this bench before the trash men do.”


“That’s not trash, it’s my bench!  I use it every day while waiting for my son to be dropped off from the school bus!”


The Scavenger quickly pulled the bench out of the trunk and returned it to its position by the curb.  Slightly embarrassed but un-flustered the Scavenger simply commented, “It IS a very nice bench”, and drove off home.


He still has the perfect place for a nice bench.  He could afford to buy one at Home Depot, but I think he would prefer to wait until an unwanted bench turns up.
Posted by joeh at 9:44 AM