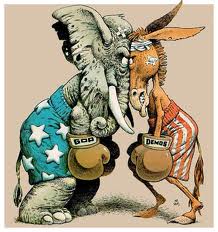 This weeks cranky re-run is from October 2012 Since tomorrow is election day I figured it would be timely.


Unfortunately I am still opinionated.


As much as I no longer want to discuss politics, being a stubborn opinionated clod, it is often very difficult to bite my tongue.


The problem is that people do not ask you if you want to discuss politics.  If they did it might go like this:


“Excuse me, I have an opinion on who should be elected president this November, and if you don’t agree I would like to change your mind.  Would you like to hear my opinion?”


“Why I am sure that it is an interesting opinion with many facts and statistics to support it, however I have already made up my mind and no facts or statistics will change my opinion or how I plan to vote, so any conversation about the election could only prove to be unproductive.  Who do you like in this week’s Giant’s game?”


Unfortunately conversations never go this way.  Generally either at a casual meeting or over the internet I am greeted with this:


“Excuse me, I don’t know you, but don’t you think that Mitt Romney is a scum sucking, hate the poor, rich bastard who wants to lower taxes for his rich cronies and convert the rest of the population into corporate slaves, while ending legalized abortion, and eliminating homosexuals?  Oh and what about his plan to drill for oil by fracking in your backyard and polluting the atmosphere and causing the ice caps to melt which will flood the property of anyone making under $250,000 a year?”


I would like to respond, “No comment.”  But that could be interpreted as,
“Oh yes, I very much agree with your intelligent assertions.”
Alas, I am unable to do this.  Instead I get dragged into a political argument that I had no desire to be drug. (Dragged? Drugged? Be druggen? One of those.)


For you liberals, I also am unable to follow along with the extremists on the right who want me to agree that President Obama is a card carrying communist, is a non-citizen Muslim who hates America and wants to establish himself as a Supreme Dictator, take money from hard working rich people and distribute it to his friends, while at the same time making abortion and homosexuality mandatory and outlawing the burning of any fossil fuels.


It is as if someone sidled up to you and said, “Excuse me, but there is no God but Allah and Mohammed is his name.  Don’t you agree?”


Until I learn how to bite my tongue and just ignore these antagonists, I am afraid I am doomed to locking political horns whether I like it or not.


How do you avoid discussing issues with fanatics who constantly want to drag you into a political discussion and convert you to their position?
Posted by joeh at 8:09 AM