STUPID HEADLINES 110214
It is time once again for 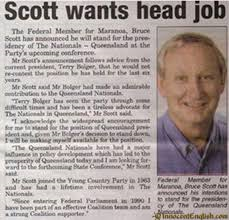 One headline may be completely made up, guess the fake and win a mention and a Whoop-tee-doo. 'None of the above' may be a correct answer.

Hawaii officials warn of possible lava evacuation - What could possibly force lava to have to leave?

Man smashes 10 Commandments - Claims the hardest one was that Adultery thing.  "I had to get married to do that, of course that made number six easier to smash."

Large flightless bird closes Indiana highway -  Can you tell me how to get, how to get to Sesame Street?

University of Idaho to change football name from Idaho Vandals to Idaho Spuds - You just can't offend all those kids with spray paint.

'Operation' game inventor can't afford his surgery - Plus he can't find a surgeon that doesn't light up his nose.

Pope Francis declares evolution and Big Bang theory are right and God isn't 'a magician with a magic wand' - However, he did make little green apples.

Google searching for cancer cure - If it was that easy we'd have had a cure years ago.  I'm pretty sure you have to develop a cure before you can find it on the internet.

Giffords struggling to make guns a midterm issue - It may be a little late, the election is Tuesday.

Jose Canseco Accidentally Shoots Off His Middle Finger - I think the Giffords may have just won a vote, and Jose is at a road rage disadvantage.

New Jersey Gov. Chris Christie Argues With Sandy Heckler - I'm pretty sure I went to school with a Sandy Heckler.

Oklahoma Gun Range Awarded Liquor License - Relax, they are only allowed to serve US Postal workers.
Medicare bought meds for dead people - They might work, if only they could get them to swallow the pills.

Large Boulder found on Mt. Rushmore bears striking resemblance to Obama - No one noticed because it was behind a Bush.
This did not fool:


"Large Boulder found on Mt. Rushmore bears striking resemblance to Obama"--that's just silly!! (Although I once found a potato chip that looked like Queen Victoria.)


Gonna fool her yet! http://fishducky.blogspot.com/

troutbirder
Well everything seems to be Obamas fault these day so why should rocks be any different?

Photos, stuff, and a beautiful German Shepard; Just go there! http://baron-troutbirder.blogspot.com/
J
I think it's the Obama rock. The one I REALLY think is the craziest is actually true - saw it in the news. But I won't tell!

Crafts and Grandma stuff worth a visit http://www.whathappensatgrandmas.com/

stevebethere
I am gonna go for the Obama rock ..........behind a bush LMAO
For your daily shot of humor  http://bethere2day.com/
Stephen Hayes
I doubt anyone would admit that a random rock formation on Mt. Rushmore looks like Obama, so I'll pick that one.
A blog site must @ http://thechubbychatterbox.blogspot.com/
Dan the Mountain Man
I am going with "Large Boulder found on Mt. Rushmore bears striking resemblance to Obama." I am going with the crowd this week. I will hear it is true on Monday or Tuesday.

Learn something new every day @ http://emhawker.blogspot.com/
Val
Oh, dear. I am going to run with the herd this week, and pick the Obama Boulder as fake. What are the odds of such a coincidence, of all the places where an Obama boulder might be found, for that very rock to be located at Mt. Rushmore?

Get to know Hick, Pony, Smarticus and lots of old TV references from the internets own Val the Dictorian @ http://unbaggingthecats.blogspot.com/
Jimmy
Large Boulder found on Mt. Rushmore bears striking resemblance to Obama, this would also be the one I would go with, and if I am wrong well Whoop-tee-doo ha ha
It's just his opinion, but in my opinion you need to check Jimmy out @ http://jimsop.blogspot.com/
I Hate when so many people get the fake, this mention stuff takes a lot of time.  However these are all fine bloggers, check them out and tell them Cranky sent you!
Oh, I almost forgot, thanks to TexWisGrl @ http://run-a-roundranch.blogspot.com/  For her Stupid Headline submission  Go visit for photos of critters you don't see unless you live in Texas.
Come back nest week for more:
STUPID HEADLINE SUNDAY!!﻿