THE IDIOT BLANKET - a cranky re-run 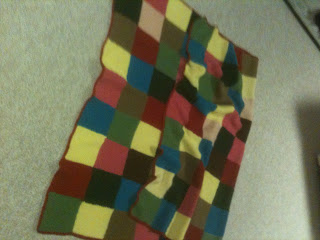 My mom would have been 99 today.  This re-run from May 2012 is for her!
I see in the blogosphere there are many crafters.   It is nice to know that some old time skills are not completely lost, but in general i-phones, i-pods, Kindles and texting have replaced the female art of killing time by knitting or crocheting.

I remember, years ago, commuting to work by bus or train and 75% of the lady passengers would be passing the time with needle and yarn.  It was fascinating to me that they could carry on a conversation and or sight-see without stopping the click click of the knitting (crocheting) process.

In those good old days (good except for polio, measles, mumps, chicken pox, rubella, TB, and no internet or cable TV) young girls were taught the art of turning yarn into apparel while young boys were taught to catch a ball.

During this process, when ever anyone asked her what she was crocheting she would tell them she was making an “Idiot Blanket.”  Mom liked to give things colorful names.  She had a couch which was too big so she had it cut down to a size that was neither a couch nor a love seat.  She called it “The Bastard.”

I find it amusing that that piece of furniture will be passed down generation to generation and will always be known as “The Bastard.”  At some point no one will know why it is called that, but it will always be known as “The Bastard.”  The blanket will be the same.  Generations from now, future Crankys will ask why is this blanket called an “Idiot Blanket.”  Somewhere along the way the visual of my mom slowly plodding away making 3x3 squares will fade away but I will bet the blanket will always be called “The Idiot Blanket.”

Just looking at “The Idiot Blanket” keeps me warm.
Posted by joeh at 8:32 AM