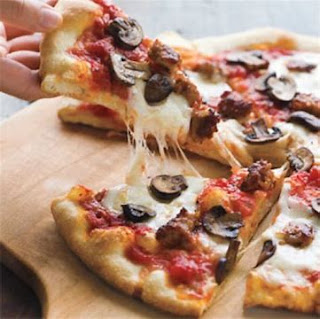 I had my first slice of pizza when I was 18.  There may have been one pizza parlor in our town, but my mom did not like ordering out, and pizza was just “That ethnic food.”


I always assumed I would not like it anyway, even though when I smelled it walking the Jersey Shore boardwalks it made my mouth water.


Besides the repulsive thought of anchovies on dough, my older brother was once sick on a Saturday morning.  He blamed his stomach problem on “Bad Pizza.”  I did not want bad pizza to give me such a problem.  Apparently the “Bad Pizza” was really too much beer the night before.


My freshman year in college a bunch of guys ordered pizza.  It smelled really good.  It was plain, no onions, olives or anchovies.  I was feeling brave, I may have had a few beers to strengthen my courage.  I tried a slice.


This was the best food I had ever eaten.  I wanted to order it again every night for the next week.  How could I have lived so long without ever eating a slice of pizza.


I’d have to say pizza is probably my favorite food in the world…well maybe tied with Chinese food.  And not that cardboard stuff with the dice on the box, or the crap from the “Hut.”  Might as well order from “Pizza R Us.”


My pizza has to come from someone named Mario or Nino.  Baked by someone with an accent who talks with his hands.  The crust should be thin, soft and bend in half with the tip slightly drooping over.  If a hot piece of cheese leaves a burn bubble of skin on your upper palate that is just a price that is worth paying.


Turns out that you can order pizza with tasty toppings, not like Gleason’s “With the works.”


My favorite topping combo is sausage and mushroom.  I add copious amounts of those hot red pizza peppers.