At Least I Did Not Get Shot

At Least I Did Not Get Shot 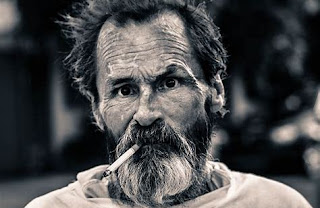 My wife had to make a bank deposit to her Christmas Club before we went out to dinner tonight.  As she pulled into the bank parking lot the alarm of a parked car behind us went off.  I thought nothing of it as car alarms go off all the time.  A leaf drops and the alarm goes off…who knows.


I waited in the car as Mrs. Went into the bank.  The alarm kept honking.  It was a bit annoying.  Then I noticed an old man, at least 80, limping away in a zombie like step-drag, step-drag pace.  He had a cigarette dangling from his mouth, some kind of folder under his arm, and did not seem to mind a constant drizzle of rain or the car alarm.


He looked as if he might not have a roof over his head most nights.  He slowly step-dragged his way out of the lot.  I figured he must have bumped into the car setting off the alarm, but he did not seem to be bothered by the honking.


The car alarm stopped after a few minutes.  A few minutes later, back came the old man step-dragging back toward the once honking car.  This dude seemed a bit sketchy, but I was not concerned about what he was up to.  Pretty sure he was no kind of threat other than you never know what is going on in the minds of a sketchy person.


I did wonder what he was up to as he walked toward the car.  Then I saw him pull something metallic out of his pocket and into the folder he was carrying.  It looked like it might be a gun.  I was alone in my car in an empty parking lot with a weird guy who might have a gun.  Now I was mildly concerned.


The old dude went to the car and opened up the back hatch.  "Oh" I thought, "I guess it must be his car, nothing to see here. "


I minded my own business when suddenly this old weird dude was at the front window of my car opposite my passenger seat and looking in at me.


“Whoa!” I held up my hand, and he turned away and went back to his car.  Now I was spooked.  I did not like sitting in a car in an empty lot with a weird dude who may have a gun lurking around.  I got out, locked the car and went into the bank.


As I went into the bank, old weird dude started the car and slowly pulled away.


What the heck just happened?  Did this guy have a gun?  If it was his car, why did he not shut off the alarm?  Why did he step-drag away and wait until the alarm stopped?  Why did he sneak up on me and peek into my car?


Did this guy break into the car and then just step-drag away until the alarm stopped?  Was he spooked by our parking while he was in the act? Did he know how to break into a car and start it, and steal it?  Did he have a gun?  The car had a Canada plate, not likely from anyone in this very local bank, but then this guy did not look like he was on a road trip from Canada.


I probably should have called 911 from the git go.  It couldn’t hurt to report suspicious activity.  A few questions by the police wouldn’t have hurt this guy if he was on the up and up.  I just never thought to do that until it was too late.


In retrospect I really think this guy stole a car and I just watched.  I feel bad, like I was not a good citizen.