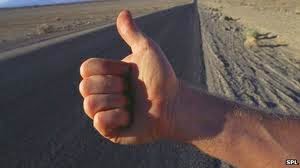 I haven't seen an actual hitchhiker for years.  Back in the day it was fairly common.  This is an excerpt from "I Used TO Be Stupid"  which recently sold a milestone 11th copy.

Back in the day, I used to hitchhike.  Apparently that was a dangerous thing to do. I did not know.
I used to do lots of dangerous things:
I rode my bike without a helmet.
I rode double on the handlebars of my friend’s bike, also without a helmet.
When it snowed my friends and I would wait by a stop sign and grab a ride off passing car’s bumpers (bumper hitching). Most of the drivers would give us a thumbs up and even go faster as we hung on and skied the snow packed road. (They seldom sanded or salted anything but hills in the olden days.
I went trick or treating without adult supervision, and when I came home I would eat the apples without fear of poison or razor blades.
I let my children sleep on their stomachs as babies.
I drove without a seatbelt.
My children never used car seats.

I used to be stupid.

Of course I was not foolish about all things.
I would never swim without waiting at least an hour after eating.
I would not watch TV up close.
I would not make a face for fear of the look becoming permanent.
I always kept my elbows off the table, and because of the poor starving children in China I always ate everything on my plate.
I did hitchhike.

I can’t remember the last time I’ve seen a hitchhiker.  It used to be quite common.  When I was only thirteen, my friends and I would hitch to school in the morning if we missed the bus, and hitch home after school when activities kept us past the bus schedule. This may sound risky by today’s standards, but almost all the rides we picked up were from neighbors or family members who were on their way to or from the train station.

In College I used to hitch from Westfield, N.J. to Easton, Pa. (a 60 minute trip) at least once a month.  Sometimes I hitched alone, sometimes with Frog.   Someone, usually Mrs. Frog or my Mom, would drop us off on Rt. 22 and we would hold up a sign for Lafayette College.  Invariably another student or an alumnus would see the sign pick us up, and we would get a lift to campus or to the hill in Easton just below campus.

Hitching a ride home from Easton with a Westfield sign did not always result in a student or alumnus stopping to give us a lift.  Drivers who picked you up on the trip from Easton were a more eclectic bunch, and it often took several pickups to get home.  The rides home were always interesting.  We always met interesting people and had interesting conversations.  Except once, which was my last hitchhiking trip.

Frog and I were on Rt. 22, that afternoon looking for a ride home for the thanksgiving break.  A Lincoln Continental pulled over and the driver who looked a bit like the fat Elvis yelled out, “youse boish looking for a ride?”

We hopped in eagerly and did not immediately notice the odor of bourbon which was wafting through the car.  Fat Elvis did not say much, he was going as far as Union which would take us all the way to our Westfield exit and that was all we needed to know.
Frog and I were a little concerned as our driver seemed to occasionally swerve inappropriately and did not seem the least bit concerned with the 60 mph speed limit.  We gave each other a nervous glance, Elvis obviously had been drinking, but we thought what the hell, a ride is a ride, and besides what were we to do?
“Excuse me sir but you seem a little toasted, could you just pull over here?” Hmmm it just might be a bad idea to piss off the drunk.

We said nothing.  Sitting tight might not have been the smart thing to do under the circumstances, but we used to be stupid and the next event proved it.

About half way to Westfield, fat Elvis pulled over to the White Horse Bar and Grill.  “You guysh sit tight, I won’t be but a minute”, he said as he staggered toward the entrance.  This was our chance to slip out of the car, go to the highway and try to secure a safer ride home.  Who drives drunk in the afternoon, and pulls over to a bar to drink even more?
Frog and I remained seated.  Were we afraid to insult the drunk? Were we that desperate for a ride?  Did we think he’s just going in for a sandwich and coffee to try and sober up a bit?  I don’t really know.

I guess we just, you know, USED TO BE STUPID!

“Well then lesh get motererin…ing.”

The next twenty minutes were the among the scariest minutes of my life.  We made it to our exit, somehow, and except for needing a change of underwear we were both OK.

That would be my last time hitchhiking, (I also swore off roller coasters).
Frog and I both stooped to begging for parental chauffeuring rather than risk accepting rides with strangers.  The next year I was allowed to bring my Dad’s 1959 Ford Galaxy on campus and thumbing for a ride became a distant memory.

Kids, don’t try hitchhiking, but if you do, wear a helmet!