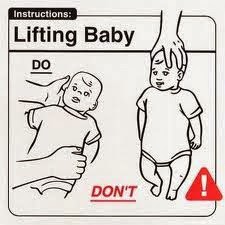 I was 52 years old when my fourth child was born.  It was 22 years since my third child.  Apparently, I soon found out, rules to raising a child had changed in 22 years.


I appreciated disposable diapers, they are way better than the old cloth diapers and diaper service (though there is no better wiping rag than a cloth diaper.) I was not so fond of baby monitors which alerted you every time the baby so much as rolled over.  I learned that you need more support for baby in the back seat of the car than wedging in a few books to keep him from moving.


I also learned that a 52 year old father looked more like a grandfather than a dad.  Women assume that grandpa has no idea how to care for a baby.  I was often offered unsolicited advice when I took my boy for a stroll in town.


"You need to cover him up more or he will catch cold."


"It is too warm for all those blankets."


"He probably needs changing, do you need help."


Shit, I've changed more diapers then any of these busy-bodies, and I did it with diaper pins.  Still, I generally took the well intentioned advice in stride.


Sometimes I did not.


One day I took Spence to town in his carriage.  He was asleep.  He was just a few months in this world and he slept a lot.  When he wasn't asleep he really was not that much fun.  I preferred it when he was asleep.


On this sunny day, I pushed the carriage into town which was less than a block from my home.  I wanted a sandwich at the local deli.  I knew the local deli always pumped up their air conditioning.  I was of the opinion that the air temperature change in the deli would wake up my sleeping baby, so I left the carriage right outside the deli, brake on, and easily visible from the inside of the deli.


Please keep in mind the last time a crime was committed in this town which I often refer to as Mayberry, New Jersey, was when a pumpkin was stolen from Mrs. Binghamton's porch in 1977.


Inside the deli several young moms started a small buzz while glancing first outside and then at me.  Finally one kind lady whispered to me,


"You probably ought to bring the baby inside."


"Why thank you so much, but I don't want the cold air to wake him up."


"Do you think the baby is safe by himself outside?"


"I can see him pretty well, thank you."

"Suppose someone runs off with him!"


"I may be a little old, but I'm pretty sure I can run down anyone pushing a baby carriage in the middle of town and if that chase wakes up my baby there will be some serious ass kicking involved!"


I was told in a very indignant manner that I should be reported to what sounded to me like a Mutual Fund Company, but was apparently some kind of child service thing.


I did not give her the finger.


I sincerely wanted to.