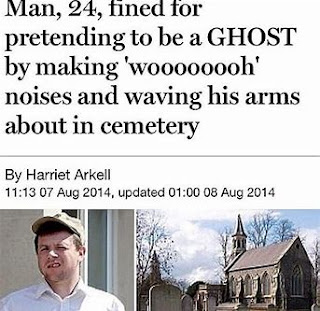 Apparently there is a law against waving your arms and going woooooooh in a cemetary
STUPID HEADLINE SUNDAY
This week’s stupid headlines and my stupider, sometimes sophomoric comments.
______________________________
Daring gang caught stealing from mail trucks traveling at 50 mph – That is so ballsy, I almost feel they deserve to get away.
Restaurant's giant aquarium cracks, gushes water into dining room – Today’s special…SUSHI.
Florida man arrested after punching ATM for 'giving him too much money' – Florida, the stupid headline gift that just keeps giving.
Fruitcake wrapped in suspicious package temporarily halts Seattle ferry – I love fruitcake, but you can’t be too careful with it.


http://joeh-crankyoldman.blogspot.com/2017/12/airport-security-stopped-fruitcake.html
Future train station at Western Wall could be named after Trump – And it will be Yuuuge, believe me.
Jodie Foster: ‘Every man over 30’ should think 'about their part' in sexual harassment – Hmmm…well Jodie I have thought about it and know what? I’m good; and I’ll bet there are others as well, maybe not many, but there are a few. Unless…does casual ogling count?
Video shows Joy Villa smacking a man on the bottom after filing lawsuit against Corey Lewandowski – I may be sexist, but if it is Corey Lewandowski it is harassment, while Joy Villa can smack my butt any time.
Arrested Connecticut woman snorts cocaine at police station – In her defense, where was she going to hide it?
Indiana lawmaker wants Indianapolis Colts to refund upset fans if players kneel during anthem – So, some snowflakes can be conservative.
'Wheel of Fortune' fans enraged after contestant buys pointless vowel – She probably could have saved $250, but “ENRAGED”? Get a life people, it’s a GAME show!
D.C. restaurant changes dress code after being accused of 'racism' – The restaurant did not allow sneakers...unless you were white...OK, that might be racist.
FEEL-GOOD STORY OF THE WEEK:
Oregon man drives truck off pier in failed getaway attempt – No loyal dog saves man this week, but this one gives me a warm glow.
http://www.foxnews.com/us/2017/12/28/oregon-man-drives-truck-off-pier-in-failed-getaway-attempt.html
____________________________
Come back again next week for more
STUPID HEADLINE SUNDAY
I almost forgot…Happy New Year!!
Posted by joeh at 1:01 AM