A Drastic Change To Save A Great Game

A Drastic Change To Save A Great Game 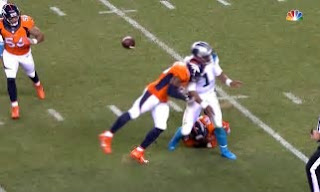 A cranky opinion for
CRANKY OPINION SATURDAY
The following is the opinion of a cranky old man with little expertice on the topic opined.  Opposing opinions ae welcome, but they will be wrong.  As always, no name calling, and that means you, you big stupid-head!
I love football!  It is the worlds greatest team sport.  It takes strength, speed, endurance, skill and teamwork, it especially takes teamwork.  On any given play, if one person does not follow his assignment, a play will not work.  It is a great team sport.
The problem with football is the injuries, particularly head and spinal injuries, and now we are finding also long-term disabilities from concussions.  If there are no drastic changes to the game, it will go the way of the Dodo bird.
Parents will not allow their children to play at the pee wee level, and high school programs will disappear.  Without new players coming to the game, college and professional football will soon be a memory.
Something has to be done to preserve this great sport and fall tradition.
There is an argument that eliminating the helmet will stop players from leading with their head as a battering-ram weapon.  That actually could work, but I doubt mom’s around the country would let their child risk the small less life-threatening injuries that would skyrocket.  Black-eyes, missing teeth, broken noses deep bruises and cuts are not things that moms will shrug off.
I am suggesting a major change to the game, a change to the way the game was played back in the fifties and sixties in high schools and colleges.  Bring back the run and eliminate or drastically reduce the amount of passing.
Why is this a good idea?  Studies have shown that today, 65% of offensive plays are passing and that 98% of head, spine injuries, and concussions occur on passing plays.
(OK, you got me, I made that up, but I suspect that if they did do a study on the subject that is what they would find.)
Head injuries occur when the ball is in the air and eyes are on the ball. Players are running full speed on passing plays and the defensive player is rewarded for hard hits that dislodge the ball and cause incompletions. Players reaching for the ball and not seeing the defenders or quarterbacks throwing the ball at the last instant before being hit are in the most vulnerable positions for helmet to helmet contact.  Intentional or unintended, those are the hits that are going to ruin football.
Running plays typically do not end in full speed blind side contact.  Players can brace themselves for a hit and avoid head to head contact.
The pass play is exciting, but as anyone who watched last weeks Army Navy game will tell you, the game is just as much fun to watch when there is no passing.  Played in the snow by two teams that specialize in the run, this game may have had four passing plays and it was a nail biting strategic spectacle to watch.
So, there is the solution to saving this wonderful game; end or drastically deemphasize the forward pass.
My suggestions?
Make the forward pass illegal altogether, or:
1.     Allow only (X number, 1 or 2) pass plays per possession
2.     Only allow 2 eligible receivers on any play
3.     Make the quarterback wear a boxing glove on his throwing hand
4.     The quarterback must declare “Pass” before any passing play and then a run is not allowed.
5.     Allow holding on running plays
6.     Defense must have at least three players line up ten yards off the ball
That’s it, my Cranky suggestions to saving the wonderful game of football.  I’ll let the experts decide on some or all of these suggestions.
You may not like the changes, but unless they are implemented, we will all be watching soccer on New Years Days in the future.
The preceding was the opinion of a cranky old man, and not necessarily that of management…Mrs. Cranky.
Posted by joeh at 10:02 PM