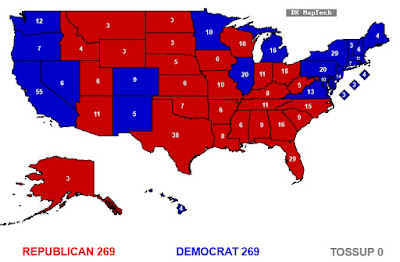 I have been trying to stay away from politics in this blog, but I don’t think this counts as a political post in a piss-people-off kind of way.


The following is the opinion of a cranky old man with little knowledge on the topic opined.  Opposing views are welcome, they are wrong, but welcome, as always, please, no name calling…that means you, you big stupid head!


It would appear that once more the winner of a Presidential election by virtue of our strange electoral college system will not be the winner of the popular vote.  The question must be asked,


“Why do we not elect based on the popular vote?”


I suspect it goes back to a time when only men who owned property could vote, and even they were not to be trusted.  Perhaps the electoral college was put in place so smart, trusted people (the electors) could overturn crazy popular results.


I am too lazy to research this, is there a history buff out there with a good answer?  Frog?? Old AF Sarge?

Here is a little from a quick Google search.  Keep in mind at the time of the Constitution news traveled slowly between states and most people knew little of the leaders outside their own state:

A third idea was to have the president elected by a direct popular vote. Direct election was rejected not because the Framers of the Constitution doubted public intelligence but rather because they feared that without sufficient information about candidates from outside their State, people would naturally vote for a "favorite son" from their own State or region. At worst, no president would emerge with a popular majority sufficient to govern the whole country. At best, the choice of president would always be decided by the largest, most populous States with little regard for the smaller ones.


Anyway, we are stuck with this weird electoral college system.  I suppose it could be changed by a constitutional amendment, but that is a time consuming difficult process.  It is also unlikely that smaller states which have electoral votes disproportionate to their population would be willing to ratify anything that reduces their political influence.


I believe we should elect our President by Popular vote.


Does that mean I think all results where the electoral college chose the winner in the face of a popular vote loss are invalid?  No!  That would be like claiming a baseball team that secured more offensive bases should win the game, not the team that made it all the way home the most times.


Different rules will have different outcomes.


If the election was decided by popular vote, then candidates would campaign in all the states, not just the toss-ups.  Voting would be different.  States that historically always favor one side or another might have a different voter turn-out.  The electoral college winners are legitimate winners because campaigns are run, and voters vote, based on the rules of the game.


I still favor the popular vote.


The popular vote seems the most just.  It would mean all areas of the country would have their concerns addressed, not just the toss-up states.  Still there may be an argument for the electoral college process, as strange as it is, and probably not for the reasons it was originally devised.


Assuming Hillary won the popular vote by around one or two hundred thousand votes; a differential of almost five million of those votes came out of New York, California, and Illinois; or perhaps more specifically, New York City, Las Angeles and Chicago, the media and politically elite capitals of the country.  If the whole country basically votes for one candidate, but the winner is chosen primarily from three states, or even three cities in the country, then a great portion of the country could feel helpless and disenfranchised. Political decisions might lean heavily to the concerns of a small geographical segment of the country.


The above point is worth considering, but I still favor elections based on the popular vote.


One more point in favor of the electoral college (which I still do not favor):


What happens when the election is extremely close like it has been several times in the last twenty years?  The recount in Florida after the Bush/Gore election was excruciating and to this day is disputed.  Imagine if that same recount was performed in every county and in every state.  It might take a year or more to sort it out and it might never be conceded or accepted.


Given all the pros and cons, I believe the President chosen by the electoral college is a fair and legitimately elected President.

I do, however favor an election based on the popular vote.


The preceding was the opinion of a cranky old man, and not necessarily that of management…Mrs. Cranky.