Heaven and Hell
I don’t know about Heaven and Hell.  Is it real, a concept, or religious hoo-ha to scare people into good behavior.  I go with a concept to represent how we must answer to God for our behavior on Earth.
I’m not so sure about clouds and angels for good people and fire and brimstone for bad people.  Maybe God just welcomes you in to his lovely home, accepting everyone.  He is, after all, the father and the creator, so in a way he is responsible for everyone’s behavior.  I don’t know; it is too complicated for me.  Whatever God decides I’m good with it.
I think God wants us all to act of our own free-will.  Without free-will we are all just part of a big puppet show, and life has no meaning.  I think the good people go straight to God's rec room; the bad have time out.  They have to stand in a corner.
“Mother Teresa!  Come on in, cookies and milk in the family room, Beethoven is playing tonight.”
And then there is:
“Adolph!  I don’t know what to say…you need to stand in the corner for an eon or two and just think about what you’ve done!”
If that is true, then a new member just went straight to the family room where there is a good football game on TV and beer on tap.  Officer Steven McDonald was just admitted. 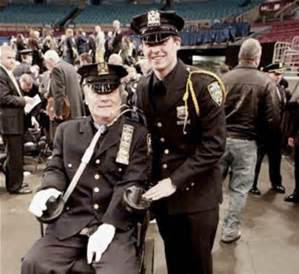 If you are from the NYC area you know Steven McDonald.
McDonald was on an undercover patrol in Central Park one afternoon in 1986 when he stopped a group of teens who he though had a gun. Shavod Jones, 15, pulled out a handgun and shot him.
"Shot me in the head and then shot me in the throat, and I as I laid on the ground, he stepped over me and fired a third shot into me," McDonald recalled in an interview with NY1’s Dean Meminger last month.
McDonald later forgave Jones, who died in a motorcycle crash four days after he was paroled from prison in 1995. Jones served 8 1/2 years of a sentence issued under guidelines for juvenile offenders.
McDonald was not expected to live more than five years.  He lived thirty.  He was left a quadriplegic and was always on a ventilator, able to speak only laboredly between breaths.
Officer McDonald never complained and was a constant inspiration to officers, New Yorkers and all people of faith.  Truly an amazing man and probably a saint.  His miracles?  Living thirty years to inspire so many people, and his incredible faith and ability to forgive.
Soon there will be a new man standing in the corner, Charles Manson. Manson pretended to be God and ordered his minions to murder for no apparent reason.  He was responsible for brutal murders of Actress, Sharon Tate, heir to Forgers coffee fortune, Abigale Folger and several others all ostensibly to start a race war (Isn’t that a lovely reason.)  Then the following night he murdered two random people Leno and Rosemary La Bianca. 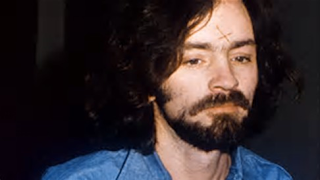 Pure good/pure evil.  They are all yours God.  Not sure how you will handle them, but then you are God, I trust your will.
Posted by joeh at 10:07 PM