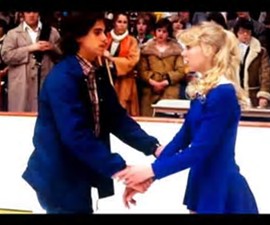 I recently ran across the ending of a movie on TV, “Ice Castles.”  A young competitive ice skater has an accident and loses all but a blurry part of her vision.  She is talked into competing anyway, and skates the performance of her life in front of a packed house that was not aware of her disability.  It is a sweet hokey tear jerker staring among others Robbie Benson whom I never liked…something about his voice and his acting.
I don’t think I ever watched anything but the ending of this movie, but the ending is what brings back this memory.
When my daughter was very young, barely walking, she had a clear love for music.  When we watched a movie and I went to change the channel as the credits were rolling she objected.
“After the lucas!” She implored.  She was always intent on the music as the credits rolled.
We should have recognized this interest and bought a piano and given her lessons, but money was kind of tight.  In retrospect we could have and should have found a way to support her obvious music love.
Years later, when Mary Beth was 9 or 10, we inherited an old out-of-tune  piano.  A popular movie on HBO at that time was “Ice Castles” and Mary Beth listened to the music from that movie again and again.  (In those days HBO only played a few movies over and over each month.)
One day I heard from our living room the theme to “Ice Castles” a very pretty piano tune.  Strange I thought, as the TV was not in the living room…but the piano was.
http://www.bing.com/videos/search?q=Ice+Castles+Theme+Song+YouTube&&view=detail&mid=7B7490E020902B113C7D7B7490E020902B113C7D&FORM=VRDGAR
(suggest you play as you read)

Mary Beth who had never had a lesson, had learned to play the theme from “Ice Castles.”  She played it beautifully, with feeling, with chords, the right chords and just where they are played in the movie.  I was flabbergasted!  She did not just pick out the melody, she played the song just as it was played in the movie.
We did find a teacher and Mary Beth had lessons for a while, but her piano teacher turned out to be a complete looney bird.  She was convinced “They” were after her, and at some point, not far into instructions, she was gone…possibly taken away in a strait jacket from what we heard.
End of lessons.  Her parents were too lazy and the costs of lessons from a sane person turned out to be insane.  That was the end of piano for my daughter.  She did continue to play by ear, but it was not the same and her interest waned.
Many years and three Mary Beth grandchildren later, my very grown daughter purchased a piano for herself.

She started lessons and has my grandchildren taking lessons.
She plays classical music, and she plays beautifully.  A few years ago I went to a recital where she and the grandchildren played.  The grandchildren were very good, but it was Mary Beth that I was the most proud of.
As an XX-year-old (over 35) she was the oldest performer in a field of children 5 to 17.  I know she was a bundle of nerves.  She played a classical piece much more complicated than “Ice Castles” but no less beautifully than she played that piece so many, many years before.
Listening today to the “lucas” at the end of “Ice Castles” brought back many memories.  My vision may have become a bit blurry.
Mrs. C thought the movie was sweet and perhaps she shed a tear or two, but she couldn’t understand why I was affected by it more than by any other “feel good” movies we watch.
And now Mrs. C, you know the REST of the story.
Posted by joeh at 9:45 PM