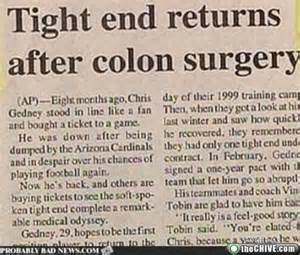 
Norwegian mass murderer says prison isolation 'damaged' him – Awww!
Study suggests humans arrived in North America 10,000 years earlier than past estimates – Dates got all screwed up because of that Y10K BC thing.
Authorities to search Manchester home of woman missing 35 years – Let’s see, she’s been missing for 35 years…I’ve got it, check her house.
‘Ice cream killer’ is so dangerous, she’s headed to a men’s prison – She killed her husband and boyfriend for not getting her pregnant.  Is sending her to a male prison really a good idea?
Air Force general uses $387G in taxpayer funds to renovate foyer – Well it probably was…er…maybe it needed…ah…you have to realize that…eh…Ah shit, that is friggin excessive!
Man suffers burns after trying to set himself on fire outside Trump Hotel – This is too easy, but someone has to say it… “You’re Fired!”
Actor to Millions of Fans: Aborted Babies Are 'A LOT Cheaper' – But then where would he get those millions of fans?  May I add, “You fu*king idiot!”

Pennsylvania man tried strangling wife after dreaming she cheated – This is why I have made it very clear to my wife that I am not responsible for anything I do in her dreams…unless it is something really good.

No charges for duo who shot amateur porn at railway station – Sometimes the headline isn’t the best part…the explanation for no charges filed: "Because despite the fact the film only surfaced last December, the actual filming happened more than year ago: outside the statute of limitations for charges to be laid."  Is that an editorial Freudian slip?
Box of Jamaican beef patties found stuffed with cocaine at airport – I’ll have what he’s having.
‘Moby Dick’s’ Restaurant Blocked From Opening Because Name Is Deemed Insulting – Building’s owners prefer a classy restaurant like Hooters.
THE FEEL-GOOD STORY OF THE WEEK:
Greyhound with a broken leg leads Spanish vets two miles to her puppies – A good dog story never fails.  http://www.dailymail.co.uk/news/article-4135630/Dog-broken-leg-leads-vets-two-miles-puppies.html#ixzz4WM62gyiP
Posted by joeh at 10:11 PM