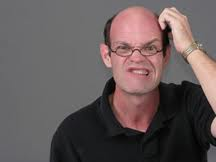 This cranky re-run is from January 2012...I still don't know what it meant.
???
Is anyone wondering what the HELL is this blog about?  “BOWL CLEANSE?”  What is cranky going to rant about today?
I don’t know either!
Here is the deal.  I like to have seven or eight posts “in the hopper” at any time.  When I am running low, I go to my “IDEA” file and choose a subject that I thought of sometime before.  I get lots of ideas for a blog, when I get one I write the idea in my “IDEA” file.
Today I went to my “IDEA” file and found several entries which at one time must have seemed like a great topic but now…?
“Shame on you” – Ah… people that are full of themselves?  Stuff I did that was just wrong?  Stuff someone else did that was just wrong?  Nah.  I would never say “Shame on you.”  I got nothing!
“Tattoos” – I don’t have a tattoo.  I don’t want a tattoo.  I don’t like the look of people that are covered with tattoos, but I couldn’t write a blog about it.  I don’t really care one way or the other about tattoos.  It is written in my “IDEA” file, but…I got nothing!
“Jeopardy” – Was this about being in jeopardy or the quiz show?  I got nothing!
“The Water Park” – OK, I am sure this had to do with the trips we took to the water park when we were at the shore (in New Jersey the beach is just called “The Shore”) last summer.  I may have had some good stuff, but I forgot it all.  Except….No, I got nothing.
“One year-old birthday party” – This had to have something to do with one of the Crankettes’ birthday parties, but that was a while ago, and…I got nothing.
“Bowl cleanse” - ? Bowl cleanse? Was I drinking when I wrote this? I can’t even make up something to make up!
I got nothing.
Posted by joeh at 11:11 PM