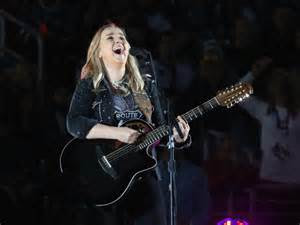 Friday night we went to a Melissa Etheridge concert.  Mrs. C loves concerts, myself not so much.  This concert was in New Brunswick, only 15 minutes away, so that makes it less painful for me.
I’d heard of Melissa, but I missed the eighties and much of the nineties.  No, not drugs…kids.  Anyway, I did not know what to expect.
She put on a very good show.  She is a powerful guitar player, playing several styles and shifting between twelve strings (very cool sound) and six.  She also has a powerful bluesy voice, a little Joplinesque.
The theater was packed, probably 3000 strong.  One thing I do like to do at concerts is people watch.  This concert was interesting.  It seems it was predominately women.  Most of these women apparently left their husbands home and came with another lady friend.  They were very into Melissa.
As much as I like music, and as much as I enjoyed ME’s performance I never have an urge to get up and dance.  Many in the audience felt different.  They danced in the isles, if you call it dancing, and in their seats.  There was a lot of arm raising and pointing.  Whenever Melissa started a song that they knew there were guttural screams of delight…I don’t believe I have ever in my life been so thrilled about anything that I had to let out a guttural scream.
It was an excellent show and I enjoyed it.  I did have an issue with the seating.  I am all of 5’ 9” and my knees were scrunched against the seat in front of me.  What the hell does a man over 6’ do?  At least I was able to stand up occasionally to stretch and also see over those raised hands.
One other question.  Why do people applaud with their hands over their head?  I call it the high clap.  It is not as if the performer is going to see them and invite them backstage because they are such super fans. 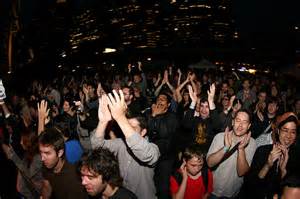 Look at me, I'm clapping!
After the concert, I needed to use the men’s room.  The line to the men’s room was negligible.  The line to the lady’s room was a mile long, after all, women do take longer and the concert was about 85% women.
Many women apparently got tired of waiting and invaded the men’s room to use the stalls.  With all the hoo-ha in the news about gender specific restrooms…it was not a big deal.  It’s not like these women could use the urinals, and no one cares who is in a private stall.
Ooh a woman could see me standing by a urinal!!
What a non-event.
That’s all I have, it was a great show, we had a good time.
Posted by joeh at 10:14 PM