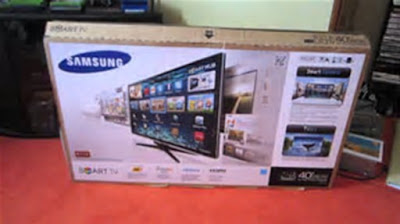 We bought a TV this week.  We have needed a new one for a while.   Not so much needed as wanted.  We watch a lot of TV from bed and the bedroom TV is kind of small.
Small…Ha…it has a 32-inch screen.  I remember when a 21-inch screen was as big as you could get.  I bought a 21-inch color TV in 1971.  It weighed about 2000 pounds and cost $450.  It got great reception on all of five stations.
Still, 32 inch is small when you have 70-year-old eyes.  The biggest TV we could fit in our cabinet (old people use cabinets, we don’t trust wall hangers) is 40-inches.  We bought a 40-inch “smart” TV for $375, less than that old TV cost in 1971.  It weighs about 20 pounds, also less than the one from 1971.
Not sure what to do with a “smart” TV.
We could use it to watch the final episodes of the last season of “Orange is the New Black.”  We might borrow my son’s password to get Netflix.  Before you accuse me of stealing, we bought the complete DVD set for the last season and the final disc is defective…I’m pretty sure Netflix makes money on those DVD’s.
We picked up the TV Friday night.
I am excited to use my new toy, and I want to finish the “OITNB” season while the plot is still fresh in my mind.  I figured we would set it up this weekend.
I figured wrong.
“We aren’t going to set it up until I clean up the cabinet, straighten out and vacuum the floor, and I won’t have that done until next Friday because were going out to dinner tonight and to a party tomorrow afternoon.”
“Friday!  Do you have to wash the windows and wax the car too?”
“I don’t want to start out the new TV in a sloppy room and I’m going to busy until Friday!”
I almost started to stammer a “But, but, but.”  I stopped myself, I felt a “You’re a Jerk” coming if I expressed my true feelings.  Instead I resorted to a hurt puppy dog face.  Oh yes, cranky can play the pity card.
“OK, maybe Tuesday, I’m off work on Tuesday.”
If that didn’t work I was going to threaten to set it up myself.
I suppose I will have to vacuum.
___________________________
This just in, because of a snow storm, dinner out was cancelled and there was football on the new TV Saturday night!  Unfortunately I wasted a pity card…only get a few of those a month.
Posted by joeh at 10:30 PM