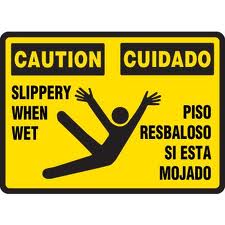 This cranky re-run is from January 2011
The USA is a melting pot for peoples and cultures from all over the world.  Our citizens and visitors speak many different languages.  I am not like many in our country decrying the fact that some in this great land do not learn to speak English.  My objection is the proliferation of multilingual signs.
Printing signs in multiple languages is not cost effective, and I think it is insulting to those that do not speak English.  If you see a big yellow sign on the floor with a picture of a dude slipping on his ass, is not “Caution Wet Floor” enough?  What cretin, regardless of his preferred language does not figure this sign out?  How many times do you need to see this sign before you learn that “Caution Wet Floor” means “Cuidado Piso Mojado”?
If you are going to a rest room and don’t speak English, which door do you take; “MEN” with a picture of a dude, or “WOMEN” with a picture of a dudette?  If I spoke only Spanish I know I would be relieved to also see “Senor” or “Senora” because I would be too stupid to figure it out.
Maybe I have too much faith in mankind, but I think that a picture of a lit cigarette in a circle with a line through it would be enough for most people to figure out smoking is not permitted.  If not, is it asking too much to expect Non-English speakers to learn that “No Smoking” means the same as “No Fume”?
In NYC the pedestrian signs only say “Walk” or “Don’t Walk”.  I have never seen a confused foreigner standing on the curb unable to figure out when he is allowed to cross the street.
Do we really need our exits to be marked both “EXIT” and “SALIDA”? Maybe this is convenient for my Spanish friends, but I get confused.  Is this the way out of the building, or will I end up standing in the salad line?
What happens to all the visitors of this country that speak neither English nor Spanish?  It is just so sad to see all those foreigners falling on their asses running through the “Caution/Cuidado” signs, walking in unexpected to the wrong rest rooms, not knowing how to leave a building, and smoking like a chimney right under a “No Fume” sign.
Do we need to put up signs in every language that visitors or residents speak?  Where do you stop?  Signs in Russian, French, Japanese, Chinese (twenty dialects), Arabic, and Yiddish, would not only be mind boggling, but would still not cover everyone. What of people from India, or the twenty plus languages of our own Native Americans.
Do we need “No Parking” signs to also say “No paaking” for our Massachusetts residents?  Do our signs really need to be multilingual?
I don’t think so.  Creo que no.
Posted by joeh at 10:26 PM