A PLANT ON A ROCK IN THE RIVER

A PLANT ON A ROCK IN THE RIVER 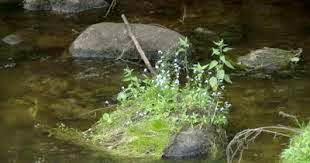 This re-run is from September 2014
Several years ago, while on a fly-fishing trip with my friend Frog, I came across a plant on a rock in the river.  If I was catching fish and not sitting on the river bank trying to untangle my rat’s nest of a line I would not have even noticed the plant on a rock in the river.  I intended to take a picture of it, but I was afraid of dropping my camera/phone in the river.  It looked much like the picture above only even smaller and more pitiful.
The plant on the rock in the river caused me to wax philosophically.
How did it get there?  Did a blob of mud just happen to stick to the rock?  Did a seed float in the breeze and just happen to land and stick in that blob of mud?  The river was at a seasonal low point.  It would just be a matter of time before a rainfall would cause the water to rise and the plant on the rock in the river would wash away.
What was the purpose of the plant on a rock in the river?  It was a seed which miraculously found a nitch in which to grow into a plant that had no chance of survival.
Somehow it spoke to me.
It spoke to the fragility of life.  It demonstrated how even a tiny seed could fight for life, would cling to a tiny slab of mud and fight to grow and perhaps reproduce.  Its roots were blocked by solid rock less than an inch below the slab of mud.  A river raged just inches away from pulling the slab of mud and the plant into its watery demise.
My struggle with untangling my line was so infinitesimal compared to that plants fight to exist.
When times get rough, when life seems hard, I think of that plant on a rock in the river.  The water will inevitably rise, but that is not an excuse for not clinging to the slab of mud stuck to the rock.  Who really knows when the rain will come?  Who knows if the plant might just hang in long enough to flower and to have its seeds pollinated and scattered in the wind to land on another slab of mud and continue the species?
Why does the plant cling to the mud on the rock in the river?
Because it can.
Because it must.
Posted by joeh at 11:01 PM