I Don’t Think So

I Don’t Think So
I am generally a wildlife friendly person.  I like the rabbits and squirrels that are in my yard.  I have been a bird lover for years, the Animal Planet is a favorite TV station, and I won’t squish a bug that is outside, or swat a fly that is not bothering me.
I don’t mind basement spiders too much as long as they keep to their webs.  I don’t like ants and do spray inside and outside regularly to keep them away, but they don’t really creep me out.
These guys, however give me the heebie jeebies! 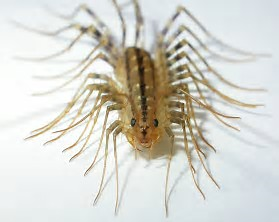 Centipedes!
I see one of these guys in my basement from time to time and I can’t rest until I negate him.  They are not easy to dispose of.  They are fast and they head for cover.  Recently I read that you should not kill these insects.  Apparently, they eat smaller insects, are not disease carriers and in general are a homeowner’s friend.
I don’t think so!
For those saying to leave them alone; would you bring them into your home because they are so dang useful?
I don’t think so.
I realized that if I see one of these creepy crawlers every now and then, many more are in hiding.  That makes me shudder.  I had to do something.
I bought some sticky traps and placed them in various places in the basement.  After a few weeks, most of the traps were empty.  Two were deadly.  One in the storage area caught five of the buggers, and one in the sump pump area caught four.  I tossed those traps and replaced them with new sticky traps.
After two weeks both new traps are empty.
Centipedes in the house?
I don’t think so!
Posted by joeh at 12:13 AM