FROM THE MIND OF MRS. CRANKY

FROM THE MIND OF MRS. CRANKY 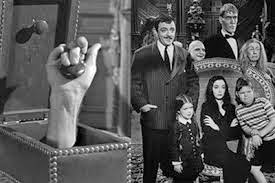 I have spoken before of Mrs. Cranky’s remarkable ability to memorize and recite movie, TV and even commercial dialog.  It could be annoying, but I find it amusing.  Last night, however, Mrs. C demonstrated a memory ability that I quite frankly find a little scary.


Commercials play over and over; popular movies are aired often, I can understand how the Mrs. can remember dialog.  She can also tell you what an episode of “I Love Lucy” is about after less than 20 seconds of watching.  It is remarkable, but not scary.  It is a favorite show, she watches whenever possible and it is possible a lot.


Last night I awoke at 4 am with a slight ear ache.  I iced it and to pass the time turned on the TV.  I watched an episode of “The Addams Family.”  Now this was a popular show 50 years ago, but it is not re-broadcast all that often.  I see it from time to time, but always late at night and on weird seldom surfed stations.


I told Mrs. Cranky this morning that I had the ear thing and was watching TV at 4 am.


“What were you watching?”


“I don’t know something about looking for Thing.”


“Oh, the one where he was feeling neglected.”


“Yes, that’s the…WTF!  How do you know the episode from just me saying they were looking for Thing?  And how does a hand feel neglected?”


“That show was on fifty years ago and is hardly ever on re-run at normal hours.  How would you remember any episode?”


“Well it was on right after ‘The Patty Duke Show’, I never missed it.  That’s where they met.”


“They met because their shows were aired the same night?”


“Well they were filmed on the same set.”


“What does all this have to do with you remembering an episode of a TV show that was aired fifty years ago?  You’re scaring me!”

Her mind is creepy and it’s spooky,


She’s more than a little kooky,


She remembers every nooky
The Mrs. Cra-an-ky