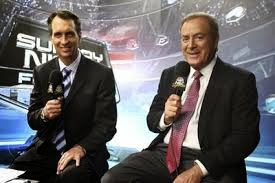 What better day for a football rant then New Year’s Eve.  What is Cranky ranting about?  Too much football?  Too many bowl games?


Hell no, there is no such thing as too much football.


This rant is about the TV football color analysts.


Dudes…your job is to explain the game, explain each play, analyze situations, and add color and understanding for the vast audience with low testosterone.


What do you do instead?


You use stupid confusing terminology that your audience which already knows what is happening can interpret, but confuses the audience for which you were hired to explain the game.


Por exemplum (I was forced to take Latin in high school and I will use it…dammit!) and as a public service: here is some common “Analyst” terminology, what it sounds like, and what it actually means.

“He needs to use his legs to move the sticks.”  FRIGGIN WHAT?


The quarterback should run more often to get a first down.  “The sticks” are the markers that represent the yard marker for a first down.


“He’s gotta make that catch!” Is it a penalty if he drops it?


It was a catchable ball and if they don’t make the easy catches it will be hard to win.  You are allowed to drop the ball without a penalty.


“They need to run the ball north and south.”  What, do they need a compass?


It means run the ball straight up the middle of the field…yes, some fields do run east west…


“This guy is a great down-hill runner.” Which way is down-hill; north or south?


It means he runs hard and with a lot of momentum…no it is not you, it is a stupid expression.  Oh, also runs north…north is forward, south is backward…I KNOW!


“The name of this game is 'hit'!” Why do you always call it football?


“This guy is going to be great at the next level.” So, he doesn’t run down-hill?


Next level means the pro’s…He is good enough to play pro-football.


“If you give him too much time he is going to pick you apart.”  Pick you apart? Isn’t that unnecessary roughness?


He will have time to find open pass receivers and will gain ground with easy completions…yes North completions.


“You can’t just stand around.  You have to put a hat on somebody!” Hat? Like hat trick? Is this hockey or is it football…or 'hit'?


Put a hat on someone means to block someone…yes…I KNOW!


“We will be seeing him a lot on Sundays.” What? He goes to church?


They play pro-football on Sundays, so this player will make it to the next level.  Are you getting the hang of it yet?…no, hang time means kicking the ball real high…I KNOW!


“Here comes the hands team.” Don’t they all have hands?


No, some teams don’t have hands.


That means he thinks they should run the ball not pass it…I KNOW!


“He needs to air it out.” Does the ball smell?


That means he thinks they should pass the ball.


“That one needed to have some extra air.”  Why don’t they pump all the balls up the same?


It means throw the ball higher…hang time is for a kick, more air is for a pass…I KNOW!


“That is two three and outs in a row.” I thought strike outs were in baseball.


You get four downs to move the ball ten yards.  If you move it ten yards you get a new set of four downs.  If you don’t get a first down after three tries…you know what, never mind, strike outs are in baseball not football.


“They’re lining up in the pistol.” WHAT?


It is kind of like the shot-gun but not quite a wildcat formation. It means the backfield takes a direct snap, but from only a few yards and it is the regular quarterback and not the wildcat player who…ah hell, I don’t know either, I don’t think anyone does.


Just turn to the discovery channel, there is a “Say Yes to the Dress” marathon all New Year’s Day!