I Should ‘a Played The Lottery!

I Should ‘a Played The Lottery! 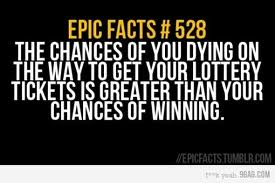 Another giant lottery just left me in the 600 million dollar dust.  I might have won, except I didn’t play.  I wouldn’t know what to do with $600 million anyway.  I think I could handle five million, and maybe even ten million, but 600 million would just screw me up.

It is a lot of work handling that much money.   Most winners of big lotteries end up badly.  If you are not brought up with that kind of money, you just don’t know what to do with it.  It becomes a full time job investing, giving to charities, and spending it.


Well about 70 % of the people that win multi-millions file for bankruptcy within five years.*  Marriages fail and people die.


Sure you can hire someone to manage all that money, but then you need to hire someone to watch the manager, and with that much money involved they could join together and rip you off.


Who needs all that worry?


Still most people dream of hitting that life altering bonanza and will invest in the dream every week or even every day.  Some people even think they can develop a system to win.


I once waited in line behind someone who failed to play a million dollar game the week before.  This was the honest to God conversation he had with the clerk.


“What were last week’s winning numbers?”


“Too bad sir, maybe if you play this week you will win.”


Funny how he played different numbers than the ones he knew he would have played the week before.  I guess he figured the numbers would never come out the same twice.  Smart.  Especially smart to play those numbers three times; that way if they did come out he could share all that money with himself…three times!


Here is my secret to winning the lottery:


Every day take the four dollars you spend on scratch-off tickets and put it away in a solid mutual fund earning an average 7% interest.  Every payday, take the twenty dollars you spend on the jackpot lottery and put it away at 7% interest.  Do this every month for 40 years, and at the end of that time you will have over $200,000 in the bank.   I think you would have to be pretty lucky to hit the lottery every 40 years, and yet it could be a sure thing!**


I wish I had followed my own formula 40 years ago!


*Ok, I made that figure up, but it is fairly common.
**Once again I don’t really know, it is just a guess, you do the math, I’m sure it is a bunch of money.