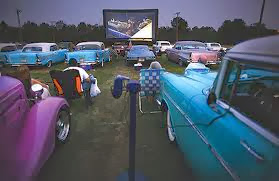 When I was a young lad with a newly acquired driver’s license the place to go was the drive-in.   In New Jersey there were drive-ins a-plenty.  Within a ten mile radius of my home there were three drive-ins.

The Amboy drive-in’s giant screen was highly visible from the northbound Garden State Parkway when approaching the Driscoll Bridge.  In the 70’s the Amboy Theater occasionally showed X rated movies.  I don’t recall any accidents, but traffic over the bridge often backed up during certain scenes.


Generally the drive-ins showed two movies, one would be a crappy Annette Funicello "Beach Something" movie, the other would be a seriously crappy movie.


We didn’t go to the drive-in for the movies, we went there for the freedom to be kids; kids in our own cars without rules.  There was no one to shush us, no one to tell us that we couldn’t smoke, couldn’t sneak in some rum and coke, or couldn’t just ignore the screen and make out with your date.


The seven words that would ruin any Saturday night were, “Why don’t we just watch the movie?”


My first drive-in experience was with my parents and brothers at about the age of five, “Gone with the Wind.” I fell asleep after an amputation scene.  I’m pretty sure that scene ruined any chance of my ever becoming a surgeon.


Years later I entered the drive-in from hiding in the trunk of a car to avoid paying for a ticket.  I don’t think the theaters minded, regardless of how many people were in a car, the car only took up one space…more kids meant more popcorn sold.   We thought we were beating “The Man,” and the owners sold extra bags of 2 cent popcorn for 25 cents.  Now that was a “win-win.”


Later, the drive-in became the venue of choice for getting close with your best girl.  A lot of action went on during those crappy movies, but I never came close to needing that precaution I bought from Billy Hopkins for a dollar.  It remained in my wallet leaving a telltale ring which told all your friends, “Yeah, I’m prepared…just in case.”


My last trip to the drive-in came when my first born was still a baby.  What money we saved by not needing a baby-sitter,  we paid in frustration because that little dickens cried during the whole show.

I think there are still a few drive-ins left, but they are clearly not long for this world.  Movie theaters in general may not last verses the competition of DVD’s, Netflix, and paid TV; drive-ins do not stand a chance as real estate becomes more valuable.
I guess the drive-in’s time is past.  Hell, you can park anywhere and watch the latest movie on your i-phone.  There is no need to sneak in anywhere when it is free on the internet, and the internet doesn’t know who you are or where you are.  Want to get away with your best girl?  Apparently there is no longer a need for any “movie” pretense.

I pretty much experienced the circle of life at the drive-in theater.


Still I am glad you were around when I was growing up.
Posted by joeh at 8:14 AM