The Greatest Story Teller OF Our Time - a cranky re-run

The Greatest Story Teller OF Our Time 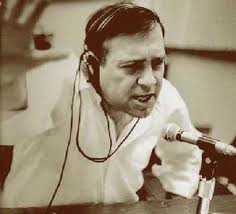 
Once upon a time, before TV, radio, and the printing press; history, news, and stories were all word of mouth.  Story tellers were in every family, clan, and town.  I imagine they were skillful and entertaining.


In this day of multiple media outlets, story telling is a lost art.  When I was a kid, in the New York tri-state area, we had on the radio, WOR, perhaps the last pure story teller of our time.


As I recall this storyteller was on every night from 11-12.  I am probably wrong; he may have just been on weekends.  I do recall being up late at night, in my bed supposedly asleep, listening intently on a transistor radio to Jean Shephard.


I don’t believe Jean was on any other radio station.  I think he was just local.  He told stories of his childhood in a blue collar Indiana town.  He told stories in a voice that wrapped around you and with details that allowed you to feel the cold and smell the smells of that town.  If you were a regular listener you soon learned all his characters, his friends Flick and Schwartz, the local bullies Scot Farcus and Grover Dill, his pain in the ass little brother, his crazy Dad (the old man,) his nurturing but always worried Mom, and his neighbors, the Bumpus family.


I don’t know if he read his stories or had a prepared outline and notes, but they all sounded as if they just poured out of his memory.  I thought I was the only one listening to Jean Shephard.  No one gathered around the water cooler or in school to recount the previous night’s story as they did with the popular TV shows of the time.  On the radio it seemed as if “Shep” was talking only to me.


I imagine he wrote for magazines which I did not read, but I think basically Jean Shephard was a just a local radio guy.  He did write a book of short stories which I recall him hawking, but I did not buy.  It was mostly stories I had already heard on the radio.  He made a movie from his stories, but few people including myself saw it.


Jean Shephard died in 1999.  I know little of his life other than from his storytelling.  His death did not make the front page.  Few people ever heard of him.  I read somewhere that Shep died thinking he had made no contribution and his life was a waste.


With his passing went the lost art of storytelling.  I might have forgotten him and most of the world may have never heard of him if not for a movie contract law.


For years, every year on Christmas Eve, all the networks and all the cable channels ran Jimmy Stewart’s classic movie “It’s a Wonderful Life.”   This movie was considered in “Public Domain” due to a clerical error that prevented the copyright from being renewed properly in 1974.  In 1993 the owners of the movie successfully won a law suit which gave it exclusive rights to “It’s A Wonderful Life.”  NBC now owns the rights to this classic and they show the movie only once a year before Christmas.


The other TV stations could no longer broadcast “It’s a Wonderful Life” and they needed something to fill the Christmas Eve airtime.  They chose that old Jean Shephard movie which I never saw.  When it first came on my ears perked up to his distinctive and unique narration.


Most of this movie is stories which I heard on the radio “asleep” in bed those many years ago.  They are as entertaining as they were on WOR, and they now entertain me every single Christmas Eve.  I am pretty sure you also know and watch this “new” Christmas Eve tradition.


This little known local storyteller will probably be heard forever every Christmas Eve on multiple TV channels which broadcast in a loop this now classic movie:

Haven’t seen it? Think…how about, 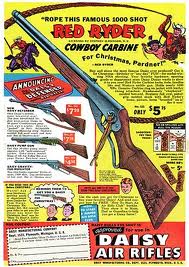 “You’re going to put an eye out kid!”

Check him out on you tube...Google Jean Shephard Radio SHow
Posted by joeh at 10:00 AM