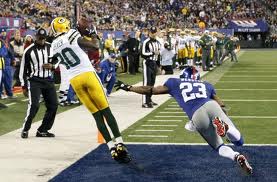 It’s about time this blog showed a little testosterone.  My friend Scott says that one more step back and I’ll start getting hot flashes.  What could be manlier than talking football?  NFL Football.  New York Giant NFL Football.

I am uniquely unqualified to talk football or to make predictions on this Sunday’s playoff game as I only know about 5 players names on the Giants and maybe 2 on the Packers.  But....


I know the Packers are very good.  They have a QB, Aaron Rodgers, who is very very good and does a champion belt thing after touchdowns (I know that from a commercial for insurance or something.)  They also have a very good pass rusher or linebacker or something named Mathews (I think), and they have a whole bunch of good players.  They must have good players because they won the Super Bowl last year and have only lost one game this year.
The Giants have lost a bunch of games this year, but they did have a very tough schedule.  They have a Manning for QB so that has to be good, and their team is the healthiest going into this game as they have been all year.  Ahmad Bradshaw is underrated as a running back.  When he is healthy he is great.  The really big guy, number 27 is also healthy.  If he runs straight up field and stays low, he is a beast.
The Giants are also very strong on the defensive line.  Jason Tuck is finally healthy; Peter Saint-Pierre is great, and Uminiminyura and Yomomota are excellent pass rushers.
Ok my credentials are weak, but the expert’s picks usually suck so I’m going to give it a shot.  Giants 24 Packers 16.  Actually this is an easy call.
In the first quarter Bradshaw breaks loose for a 55 yard run.  Number 80 then scores on a 12 yard pass play from Manning.  The Packers answer back with a 48 yard field goal…..wait….make that a 43 yard field goal…I forgot about the Giants going off-side.
In the second quarter the Giants score when Osi Uminoto blocks a pass into the arms of Paul Saint-John who barrels 30 yards for a touchdown.  The Packers will respond when Rodgers throws a 60 yard TD to one of the Packer receivers.  The extra point is blocked.
In the third quarter Manning marches the Giants 80 yards on a 12 play drive capped by the really big guy pounding the ball in from the three.  The Packers return the ensuing kickoff 105 yards for a TD.  Manning then leads another long drive eating up clock into the fourth quarter and ending in a 28 yard field goal.
The Packers get the ball back, and drive to the Giant 6 when Rodgers gets hit and fumbles.  Murry Saint-Luis recovers for the Giants.  After two first downs the Giants are forced to punt.  The Packers go three and out and the Giants get the ball and run out the clock.
New York Giants 24 - Green Bay Packers 16.
Oh did I ruin it for you?  Sorry….there is always figure skating on channel 35.
Posted by joeh at 12:43 PM