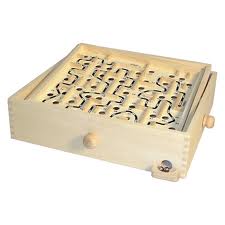 Labyrinth Labyrinth is a game of physical skill consisting of a box with a maze on top with holes, and a steel marble. The object of the game is to try and tilt the playfield to guide the marble to the end of the maze, without letting it fall into any of the holes. The game features a suspended maze surface that rotates on two axes, each of which is controlled by a knob.
The other day while surfing the net, I saw a picture of this game.  LABYRINTH. I was never very good at ping pong.  I could never put the beebees in the holes of those stupid Cracker Jack puzzles.  It took me years to get a single side of the Rubik’s Cube all yellow.

I was a master at Labyrinth.

Pop brought this game home Christmas 1956.  You had to maneuver a steel ball past 60 holes in a maze by tilting two axes of the surface, controlled by two knobs.  We had no computers, no Playstations or Game Boys.  Labyrinth was our obsession.

It took my two brothers and me a week to get past the fourth hole.  Zipping through 9-10 took another week to master.  Getting by 25 was a bitch, and hole 43 took everyone out for at least a month.  By the spring my brothers and I all managed to get that ball consistently to the end…60.

My brothers tired of the game.  At only 10 years old I was not so easily bored.

Getting to 60 was not enough; I had to take that ball back to zero.  Then back to 60 again.  The record became 60 and back, six times, finally crapping out on the way back the seventh time at 43.  Mastering the game to 60 and back was not the end of the game. I went for a greater challenge.  I went for the gold.  I started playing Labyrinth by controlling the knobs with my feet!

It was like starting all over again with the same stumbling blocks, hole 4 then 9-10, 25 and the ever difficult hole 43.  After six weeks I was astonishing my older brothers with a record run of 60 and back, 60 and back, and out at hole 25 on the attempted third leg.  The game mastered, I finally bored of the sport.

I never played again nor did I even see the game until my freshman year at college.  Professors at school often rented out rooms for student’s dates on big weekends (My school, Lafayette, was an all male school.)  When dropping off a date at an English professor’s home one weekend I saw the Labyrinth game on a living room table.

“Wow, I haven’t seen one of those in years!”

The professor related as to how the record in his family was maneuvering the ball all the way to the 25th hole.

I slid behind the maze-game and in four minutes, on my first try, I took the steel ball to 60 and back as if I had never stopped playing the game.

I decided not to tell him that I used to do it with my feet.
Posted by joeh at 8:22 AM