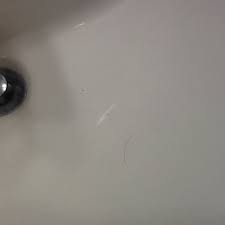 I am not as a rule a stubborn man.  There are times when a situation presents itself that is so bizarre I just have to figure it out.  Last night a hair in the sink was one of those situations.


We recently upgraded our master bathroom.  I am proud of our new sink.  The old one had chips and was in general, even after a thorough cleaning, disgusting.


Last night, before going to bed, after brushing my teeth and rinsing, there remained in my new pristine sink, a hair.  It was not a big hair.  It was just a little bigger than eye lash.  I could have flicked the hair off the sink and sent it down the drain, but for some reason I just dumped a cup of water on it.


The hair fluttered under the flow of water.  It waved back and forth, but the tiny very tip of the hair was somehow firmly attached to the sink.  Once again, I could have flicked the hair away with my finger, but this is where I became stubborn.  I could not believe the hair could hold tight to the sink and no, it was not glued by a small gob of toothpaste, the sink was clean.


Now I was determined.  I took a cup of water and slammed it hard at the hair again and again.  Nothing.  I filled the sink with hot water and then pulled the plug.  The water drained in a speedy whirlpool and the hair did not give in.  I squirted liquid soap on the hair and doused it with scalding water.  The tiny hair hung tight.


There was now water all over the counter and some on the floor.


“Joe, what the hell are you doing in there?”


“Nothing?  You are making a racket and I hear splashing.  What the hell”


“A hair? Just push it in, pick it up, grab a square of toilet paper and wipe it up.  Is that so hard for Christmas sake?”


“It’s just that I can’t believe it will not wash away.  I’ve never seen a hair in the sink that would not just wash away.”


“But you should see this hair, it’s like that friggin “Unbreakable” guy in the movie!”


I figured maybe I was being a jerk.  I wiped down the counter and the floor, took a TP square, swept up the hair, and flushed it down the toilet.

It was fun, thanks everyone who followed.

I'll be back when the world finds its sense of humor again.