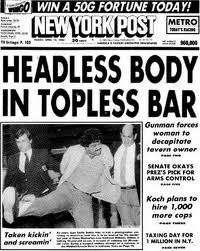 86-year-old mob hitman on streets after 50 years behind bars – Will murder for food.
Ex-South Carolina governor to marry former mistress – Does his current mistress know about this?
Would you kiss Superman or Wonder Woman? – Please…this is easy…WONDER WOMAN!  Superman just doesn’t do it for me.
Another Republican steps into controversy over rape comments – As a republican I want to go on record confirming I am against rape, women can get pregnant from rape, there is no legitimate rape, and I am in favor of post-natal abortion for any rapist.
Member of 'Speed Freak' killer duo reportedly let out of prison to help search for victims – Wait…are these NEW victims?
Fired official from Bell, California, sues for $837G in sick, vacation pay- A $400,000+ executive wants to collect for sick pay?  Did this dude punch in and out every day?  Did he get time and a half for reading business e-mails at home?
Father's will states gay son must marry a woman – So in this case, where there’s a will there’s a gay?
Heinz seeing red – Well, yeah.  It is KETCHUP!!
Baby born in plane toilet named after Emirates Airline – The other choice was “American Standard.”
Bank worker gets fired for using fake dime decades ago – Come on…he’s not even a two-bit crook!
Can hurricanes make pregnant women go into labor? – Not if it is a “Legitimate” hurricane.
Romney’s low calorie speech: Long on fluff, short on substance – But it is healthy and good for you!
Obama says Republican ideas from "last century' – Cut the deficit, decrease unemployment, fair tax structure to increase revenues…same old ideas.
Mitt Romney promotes agenda for 'winning season' Mitt, Mitt its election time.  We all love football season, but get your priorities in order.
Romney to focus on debates while Democrats gather in Charlotte – Now that’s how to win a debate, have them when the other guy is outa town!
Posted by joeh at 8:16 AM