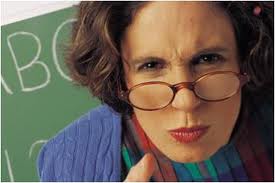 This cranky re-run is from April 2013

In talking to teachers today, I wonder how they are able to control their students.  It seems they are unable to get students attention the way they did when I was in school.  Yelling or “Losing one’s temper” is subject to the teacher being disciplined.  Sending a letter home might bring a visit from an enraged parent more often than it would enlist the discipline assistance from the parent.

I hear stories of students laughing in the face of today’s teachers.  Kids dress inappropriately, and use inappropriate language.  They text during class, smoke during breaks, and drink or do drugs at lunch.  Teachers don’t even have a smoking lounge for themselves anymore.

When I was in school, teachers had the power to make our life miserable and as a result we (usually) behaved.  A letter to your parents would result in massive punishment.  Parents assumed the teacher was never wrong.

If you wore inappropriate clothes (inappropriate was what they said was inappropriate, “You know very well what’s wrong with that shirt young man!”) you would be sent home.  If you swore you would stay after school.  If you talked back to the teacher you would face suspension.  Any of these punishments today is liable to bring a lawsuit against the teacher, the school district and the town.

Teachers found several ways to discourage talking in class.  Mrs. Brown, the music teacher would start to cry.  Miss Gromlick was a light switch switcher; on off, on off, until you shut up or got a headache.

The male teachers were the scariest.

Mr. Khoury, the Physiography (rocks) teacher and football coach had a stare that nobody dared challenge.  He would grab the podium with both hands, glare at the entire class for three seconds and then in a stern, clipped, but calm voice, simply say, “Stop talking.”

You could hear crickets in the winter.

Mr. Dunham was a thrower.  If there was talking while he was working on the blackboard, back to the class he would whirl around and fling a piece of chalk on a rope six inches above the head of the offender.  The chalk would smack against the wall and explode and the room would fall silent…end of problem.

His chalk accuracy was legendary.

Mr. Frank also spoke no words to get the classes attention.  Mr. Frank a mild mannered man would go red in the face, grab an empty desk from the front row, and lift/slam it to the floor three times.  Quiet ensued.

Mr. Hopkins my English teacher would barely break stride in quelling a problem.  In mid lecture he would calmly and quietly tell a student to leave.

“And so if you are qualifying an action...Mr. Higgins please leave the room...it is an adverb.”

“I do not care where you go Mr. Higgins, you are interrupting my classroom, please leave.”

There was nowhere a student could go during class hours without getting in big trouble.  Going to the principal’s office was the only choice and that was not good.

“Class, should we let Mr. Higgins stay just this once?”

“And if a word describes a person or an object it is called an… Mr. Higgins?”

Somehow today’s teachers manage, I have no idea how.