THEY’VE RUINED ‘WHO WANTS TO BE A MILLIONAIRE’

THEY’VE RUINED ‘WHO WANTS TO BE A MILLIONAIRE’ 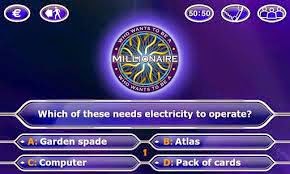 That’s right, another cranky TV rant.  I know a number of you only watch PBS and the evening news…you are excused.


Does anyone watch “Who Wants to be a Millionaire” anymore?  When this show first came out, it was so popular they ran it several nights a week.  It was fun, it was interesting, and it was entertaining.  It is now on afternoons every day.  It ain’t what it used to be.


I have several complaints about this show.


The first is I miss Regis Philbin.  Regis was always more surprised at the answers than the contestants.  I like how he was sure of the correct answer and would sometimes convince the contestant to guess, only to find himself  very surprised that he guided to person to the wrong answer.  That was entertainment!


I think Regis left of his own accord, so not much to do about that.


The current host Terry Crews is a very good comedic actor; he is horrible as a host.  I hate how he overreacts every time the contestant gets a correct answer and how he acts as if every contestant is his good buddy.  I don’t blame Terry Crews I’m pretty sure he is told to conduct himself in this way by the producers.  He seems uncomfortable; I think it is because he knows his performance is lame and forced.


I hate the format change.  They used to have the questions get progressively harder and progressively increase the prize money.  Now the degree of difficulty is random as is the money for the correct answer.  It makes it harder because you don’t know if an answer is really easy, or it is a trick question.


I miss the fast finger question competition that determined who gets to be a contestant.  That used to assure the contestant was not an idiot.  Idiots are no longer weeded out.


My final complaint is the way contestants answer every question.  They have to explain their reasoning for eliminating every one of the multiple choice answers.  Even if they know the answer for sure, or if they are going to walk away, they drag out every decision.  This behavior is so universal you just know they are also instructed to do this by the producers.


“’Romeo and Juliet’ was penned by what famous Bard of Avon?”


A.   Steven King B. John Wilkes Booth C. William Shakespeare D. There is no such play.


“Well Terry, I’m pretty sure there is a play called Romeo and Juliet, I’ve heard about it and I think West Side Story was based on that play.  I kind of remember a line ‘ Romeo, Romeo, where for art thou Romeo.’ I’m pretty sure that is from the play Romeo and Juliet, so I think I can rule out D.  Steven King is a famous author who has written several books, but I don’t think he has written any plays, so I don’t think it is A.  John Wilkes Booth…I think he shot Lincoln, but he was in theater watching a play…hmmm still I don’t think it was him.  The name William Shakespeare sounds familiar…I think he wrote stuff.”


“Yes, that is a lot of money, but I came here with nothing, so I’m going to take a chance and guess C. William Shakespeare.”


“Is that your final answer?”


“Well Ralph, you gambled, you took a chance, but I have to say the correct answer is…WILLIAM SHAKESPEARE!! YOU ARE RIGHT!! LET SEE WHAT YOU’VE WON.” Click click click…” FIFTEEN THOUSAND DOLLARS!!”


OMG.  Mrs. C. loves this show; I want to throw a brick through the TV screen.


Where have you gone Regis Philbin, a viewer turns his lonely eye to you…woo woo woo.
Posted by joeh at 12:15 AM