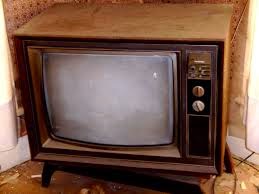 
Back in the day of roof top antennas, TV’s often broke down.  Today it seems like a TV will last at least ten years before it starts to get tired.  TV’s today are inexpensive compared to TV’s in the olden days.  Today when your TV finally breaks down you curse a bit and then just go buy a new much bigger, much better TV.  In the days before cable TV and remote controls, you called the TV repairman.


Growing up my dad was our TV repair man.  If the TV didn’t work it was one of three problems.  A blown tube (GIYP), a bad tuner, or the picture tube was dead.  If the picture tube was dead it was obvious and you were what we used to call “shit out of luck.” If not, you called the TV repairman, like I said in our house that meant hollering “DAD!!”


Dad pulled every tube from the back of the TV and we drove off to the hardware store.  The hardware store had a tube testing machine.  You plugged the tubes into the machine one by one until you found the bad tube.  You bought a new tube, drove home, replaced it, and once again dad saved the day.


When I bought my first color TV, I ruined the tuner trying to get color on the movie “True Grit.” It was the first day I had the TV and I was thrilled to have color.  It is a long story which is in my second book, but the color on “True Grit” was not working in my new TV.  I twisted and turned every color related control knob trying to view the movie in color until three quarters of the way through the movie there came an announcement.


“We regret to inform you that due to technical difficulties, tonight’s show is not available in color.”


In the mean time, all my fubitsing with the controls ruined them.  I never again received a good color picture.


A year later, after watching TV in very unusual, frustrating hues I saw an ad for a TV repairman, “In home service, if I can’t fix it there is no charge.” Of course I called.


The repair guy came and after about an hour gave up, and  declared my TV color reception was fried.


“Tell you what; do you have any other TV’s that aren’t working right?  If I can fix them I will only charge you ten bucks.”


I did have a very old 11 inch black and white that I didn’t use because it was so frustrating trying to get a clear picture.


The TV repairman looked it over, pulled out the channel knob and sprayed WD40 all over the insides.  He then put back the knob, twisted it about a dozen times, turned on the set and presto, perfect reception!


It turns out that the problem with almost all tuners back in the day is they got dirty and off kilter.  WD40 cleaned them up and in two minutes they were as good as new.  This bit of knowledge only cost me ten dollars.


Over the next five years I was the miracle TV fix it man in the neighborhood.  I could have gone into business myself; me and a can of WD40.


Then electronic digital tuners replaced the old gears and gismo dial tuners.  I was out of business before I hung up a shingle. The old tubes were also replaced by miracle chips and magic.