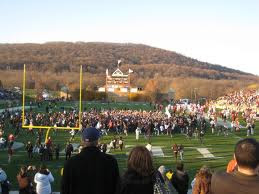 Fall of 1967 I was a senior at Lafayette College.  Lafayette is a small liberal arts/engineering school in Easton, Pa. just west of the Delaware River and New Jersey.  Lehigh University, several miles west of Easton, was Lafayette’s big rival both in sports and in attracting future engineers.


The football rivalry between the Lafayette “Leopards” and the Lehigh “Brown” (now the “Mountain Hawks”) is the most played rivalry in college football.


In the sixties both teams were not particularly competitive.  The best chance for a win from either team was the final game of the season when they faced each other.  The 100th game of the rivalry was in 1964.  Both teams entered the game with a record of 0-8.  After 60 minutes of uninspired football both teams finished the season 0-8-1.  The game was a 6-6 tie with neither team capable of scoring the PAT*.


1967 was the start of an era of turmoil on college campuses. The Viet Nam War was boiling over and it was a major point of dissention on campuses around the country.


Students, eligible for the draft upon graduation and for more principled reasons, were vehemently against the war.


The Police, many veterans of armed service, were supporters of the war.  Many of the men in blue particularly hated snot nosed spoiled rich HIPPY college kids who openly referred to cops as PIGS.


Football was not ordinarily a derisive event except for the rival student bodies, but somehow the Lafayette-Lehigh game of 1967, held at Lafayette’s home stadium “Fisher Field” brought out a large cadre of Easton’s finest.  Police patrolled the field as they never had before and in greater numbers than anyone could remember.


The first half was uneventful (boring).  Lafayette left the field with a 6-0 lead.  Halftime was more interesting.


A precursor to what would follow in this game was a halftime streaker.  An over-exuberant fan decided to race across the field at half time in his birthday suit, a common fad at the time.  The crowd roared their approval at this harmless prank until the police caught him and administered a zealous beating while hauling him off to the hoosegow.


The term “PIGS” may have been chanted during this arrest and that chanting probably did not endear the college crowd to the officers.


The game ended after another boring half of football with Lafayette winning 6-0.  The win was very exciting especially for the seniors who had just witnessed only the seventh Lafayette win in their four years of cheering on the Leopards.


We, well most of the seniors, poured out onto the field heading for the wooden goal posts.  I stayed in the stands as I was suffering from a common malady we called fourth quarter inebriation.  The hoard of students racing out onto the field were intent on tearing down the goal posts, a big-game winning school tradition on virtually every college campus for the last 50 years.


The Easton police decided on their own that this year the tradition would end.  They circled the goalposts Billy-clubs drawn, intent on guarding these prized hunks of wood.  The students, many suffering from the same malady which kept me in the stands, ignored the drawn clubs.


The cops earned their “Pig” title.


Student after student was brutally brought down by the club-wielding police.  One after another, bloodied students were hauled away.  Still the boozed up victors were intent on their spoils.  Despite the clubs, the beatings and the blood, the goalposts came down.

I don’t think that those precious goal posts were ever protected again.  The college administrators have decided it is better to lose a couple of $1500 goal posts than to risk the lives of students paying $45,000 a year for an education.


But it was never really about goal posts.  It was about authority forcing it's will on 20 year olds who did not want to risk their lives fighting the worst, most useless war in the history of this country.  A war that even today has caused political division in this country of a magnitude that never existed before.


Much of the current hatred between Liberals and Conservatives that makes compromise in our government so difficult and divisiveness so prevalent, has its roots in the Viet Nam protests of the late 1960’s and early 1970’s.


We still suffer political battles and hatred as stupid and useless as the bloody beatings doled out in the 1967 Lafayette-Lehigh goal post showdown.


In the words of the late drunken car chase felon Rodney King, “Why can’t we all just get along?”

*Point-after-touchdown for my UK and Aussie friends
Posted by joeh at 8:26 AM