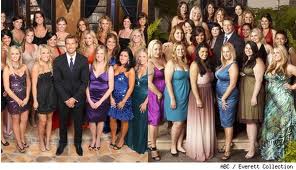 This is a blog that only a man with way too much time on his hands could post.  That’s right; I watch tons of reality TV.  “Judge” shows, “The Bachelor”, “Storage Wars”, “Deadliest Catch”, et cetera et cetera.  One of the things I like about these shows is they feature people stupider than myself.  If you are feeling low, depressed, and you need a little self esteem pick- me-up, watch a little reality TV.
For example:
“She was snooping around into my prior past.” – Defendant on Judge Judy.
“Is it true the ‘Steiff Bears’ were upper-shalant?” - Darryl “Storage Wars”
“Basically your honor you can come in one door and go out the nother.” – Plaintiff on Judge Alex
“On a scale of one to ten, I feel like I’m going to throw up!” – Contestant on “The Bachelor.”
“My thanks to anyone who comes here and shares their thoughts and feelings because…it’s thought provoking.” Dr. Phil
“The man had three babies on me whilst we was married!” -Plaintiff on Judge Alex
She lazy, she stupid, she don’t never want to do nothing.” – Salon owner on “Tabitha’s Makeover.”
“It’s kinda like some material threw up all over the bottom” – Bridesmaid describing a dress on “Say Yes to the Dress.”
“I was literately driving home” – Plaintiff on “The People’s Court” (Never read and drive!)
“On a scale of one to wonderful, today was fantastic.” – Kasey- B “The Bachelor” (What is with the bachelorettes and friggin scales?)
“Let’s get to the meat of the potato” – Darryl “Storage Wars”
“As they say in Egypt, keep your enemies close and keep your friends even closer” – Darryl (again) “Storage Wars”(Darryl is soon to star in his own show titled “He said What?”)
“I had went to he house after I had drived to the store.” -  Defendant on “Judge Judy”
Posted by joeh at 11:04 AM