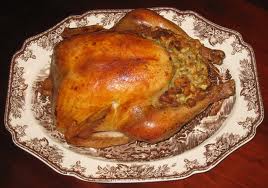 Thanksgiving is around the corner and with it come many traditions.  The universal Thanksgiving tradition of course is the Thanksgiving turkey.  We will have turkey as usual this Thanksgiving, but the tradition will not be the same as I remember in my youth.
When I was a child, Thanksgiving at our house held many traditions.
The first was the traditional non-complete thawing of the bird.  Mom always bought the bird frozen.  She took it out to thaw the day before Thanksgiving.  The day before Thanksgiving was never long enough to completely thaw a 20 pound turkey.
The second tradition was the traditional four o’clock dinner being delayed until 7 o’clock because the bird was not completely thawed.  This delay was fine in that it allowed the men (everyone except mom) to watch the end of the traditional NFL football game, and the traditional trouncing of the Detroit Lions by the Bears, Packers, or Cowboys.  When dinner was ready at last, everyone was traditionally starving to death.
Despite the dinner delay, mom’s turkey was traditionally delicious.  It was never dry, never overcooked.
Along with turkey we had mashed potatoes, sweet potatoes, sauerkraut (it was a German thing), green beans in mushroom soup mix, creamed oysters, cranberry sauce (from the can), peas, crescent rolls, gravy and mom’s special stuffing.  All this food was spread over the finest tablecloth which was adorned with silver ware, a silver gravy boat, pepper shaker and salt.  The salt was dispensed from a traditional silver tray with a cobalt blue glass insert and a tiny silver spoon.  (My Aunt Nancy once explained the reason the insert had to be cobalt blue, I don’t remember, but there is a reason.)  We never had salad, instead there was a cut glass bowl shaped perfectly to hold celery and carrot sticks.  In addition to water and wine, everyone, even the under aged family members had a glass of Taylor’s Sparkling Burgundy.
We all always dressed up for the Traditional turkey dinner which meant coats and ties.  We sat well dressed, well scrubbed, and well starving around all the food and finery, dad at the head of the table, as my mom marched in with the star of the show, the crispy skinned golden brown turkey.
The house was filled with turkey aroma as the bird was placed in front of my father.  Stomachs rumbling, we watched in awe as the traditional carving of the bird began.
Dad started the process by slowly and than in ever increasing speed clinking the knife with the sharpener like an Errol Flynn sword fight.  When he was done, he plucked a non-existent hair from his bald pate and faked splitting the fake hair down the middle.  Everyone laughed at this traditional carver’s joke, a joke done by my grandfather, and his father before him.
My father never stood up to carve the bird, he remained seated and in control.  First he cut the wings, then the legs and thighs, placing them on a separate plate.  He went on to cut the breast, saving a bit of the crispy skin for everyone.  The oyster, the juicy dark meat under the bird behind the thigh was saved for the master carver. Each serving was cut to order.  “White, dark, or a little of both?” was asked of everyone.
Each plate was then passed around and covered with potatoes, beans, creamed oysters and rolls. It was finally placed in front of a starving family member who was forced to wait until everyone at the table was served.  Each diner waited eagerly in front of his dish like a dog commanded to stay…stay…stay…until the last member had a plate in front of him and mom nodded her head; there was an eight second blessing, and we were all turned loose.
The ensuing carnage was followed with pie (choice of apple, pumpkin or mince) and vanilla ice cream (Breyer’s with the specks of vanilla bean).
Thanksgiving weekend was celebrated with more football, and the traditional turkey, mayo, cranberry sauce and stuffing sandwiches.
Thanksgivings have changed since the dinners of my youth.  The finery at the table is not quite as fine, the dinner is on time and the end of the Detroit Lions mismatch is missed.  I carve the bird before the family is called to the table.  I carve standing up and with much grunting, sweating and occasional swearing.  The traditional carver’s skill was not passed on to me.
Dinner is served buffet style.  Family members are still starved, dress is less formal and the agonizing carving wait is gone.
The turkey is still traditionally moist and delicious, and I am still traditionally thankful for the friends and family that enjoy it together.
Happy Thanksgiving everybody.
Posted by joeh at 1:00 AM