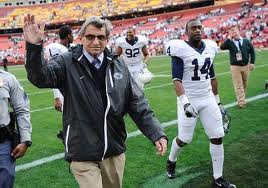 Joe Paterno has been a coach for over forty-five years.  I defy anyone to Google up a negative comment on Mr. Paterno prior to the recent Penn State scandal.   Forty-five years coaching probably over 2000 kids, dealing with countless students, opposing coaches, reporters, and alumni and I defy anyone to find a negative report or allegation of any sort about The Coach.
His caring and support for his players is legendary.  His players graduate.  His players go on to be positive influences in the community.  He takes time for people, not to promote himself, but because he cares about people.
His legacy will now be forever smudged by the actions of another.  Over forty-five years of good deeds, and leadership down the drain because of the actions of a deviant degenerate defective human being.
I understand that The Coach could have taken more proactive action in dealing with the deviant ex-coach.  If I was the coach, I would have personally knocked the asshole out and dragged him to the authorities, thus assuring no other young boys would be abused.  That is what I’d like to think I would do, it is what Joe Paterno should have done, and it is what every macho holier-than-thou male claims he would have done. But, is it as simple as that?  Most situations never are and I don’t know what information Joe Paterno had.
An atrocity was reported to him.  Was he given all the details?  Were the details so abhorrent to him that perhaps the reporter’s claim was as unlikely to be the truth as the event which was reported?
Exactly what should Joe Paterno have done when told of Sandusky’s behavior?  He reported it to his superiors.  When he was told of this man’s horrible crime, Joe Paterno was 74 years old.   Seventy-four years old and Joe Paterno is suddenly faced with an accusation toward one of his ex-coaches of behavior that I would venture to guess Joe Paterno never contemplated in all his years was behavior that anyone would or could commit.
Joe Pa came from a generation which did not hear of or contemplate such behavior.  A grown man sexually molesting a young boy?  I am not sure this is something that a man of Joe Paterno’s integrity could wrap his brain around.
I confess to not really knowing the details of this case.  Should Joe Paterno have acted differently?  Probably; but let’s not lose sight of the fact that Joe Paterno is not a child abuser.  Joe Paterno did not cover up the incident; he did report it to his superiors.
A seventy-four year old man should be put into such a situation.  A man who has spent his entire life doing from all reports “the right thing”, should not have his legacy destroyed by the actions of a perverted monster.
Jerry Sandusky is probably guilty of being a horrible monster.
Joe Paterno is guilty of being human.
Jerry Sandusky should probably be removed from society for the rest of his life.
Joe Paterno has seen a lifetime of good deeds, good behavior and good intentions destroyed by the actions of Jerry Sandusky.
Maybe Joe Paterno is guilty of a cover-up.  Maybe he is guilty of looking the other way along with other Penn State officials.  I am just saying that given the totality of his life:
Joe Paterno deserves better.
Posted by joeh at 7:42 PM