LATE NIGHT AT THE CRANKY’s

LATE NIGHT AT THE CRANKY’s 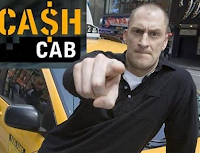 The other night I was watching old re-runs from a TV game show, “Cash Cab” with Mrs. C.


Passengers are quizzed in a cab while on their destination.  They win money or if they miss three questions they get kicked out of the cab.  One of their answer options is “Phone a friend” where they call for help on an answer.


“What year was this show?”


“Because they just made a phone a friend with Ben’s (the driver) phone and their friend answered it.  No one today answers a call from a strange phone.”


“Yeah, it must be before 2010 when all those robo calls really started up.”


“They didn’t say, ‘Guess where I’m calling from’ when did people stop saying that on their cell phone?”


“Probably sometime before 2005, I think pretty much everyone had cell phones by then, calling from all over was not a big deal by then.”


“We could tell the date by the cars they pass, except cars have all looked alike ever since 2007.”


“Or, just check information on the show and find out what season it was, then Google when ‘Cash Cab’ first aired.”