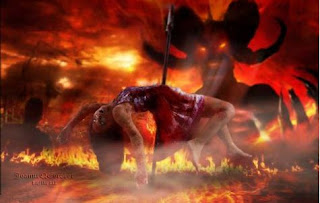 I got called for grandchildren sitting duty in Pa.  One day, easy-peasy as the boys are no longer toddlers.  Get them off to school in the morning, and be there when they come home from school.  I arrived to stay the night in the afternoon before anyone was home.


My son got a new router and a new password. I did not know the password making computering (it’s a word!) impossible.


OK.  I practiced guitar, but that got tiring after about an hour, probably because I usually practice while watching TV.  As a matter of fact, I usually do everything with the TV…don’t judge…all right judge, what the heck do I care.


Here are the remotes. 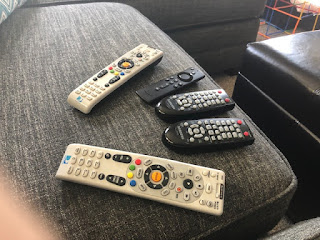 I managed to turn on the TV.  I only wanted to watch news and or sit-com re-runs and maybe a Judge Show or two.


The Direct TV Box would not turn on.  I figured out how to turn on something with a million movie and old TV show options.  I think it was Hulu or Netflix or both and then there was Sling, and YouTube and Internet.  Some of which he may not be a subscriber, I have no idea. Some asked for passwords, and I really didn’t want to watch a movie or old sports stuff anyway.
There was a button where I could ask some lady to just go to the channel I wanted.  She kept saying, "Sorry, I don't know what you are asking!"


I just wanted to watch good old regular TV and it did not seem that he had that.


AND…tonight is the final of “THE BACHELOR!!!”


I was in near panic.  Then my son came home and to the rescue.


It was all actually pretty simple.  One remote turned on the TV.
Another remote turned on the DTV box, both remotes look identical and have a tiny switch that has to be moved to either DTV, TV or some other stuff that I didn’t need.
Another remote is for all the Hulu crap I was talking about.  I do not need that remote.
The volume works on either of the white remotes if they are switched back from DTV BOX to TV and the HTML is set to HTML 2, but the TV speaker is a little funky, so there is another remote that works a special “Much Better” speaker.  Actually, there are two remotes for that, I think either one works.  I have no idea why there are two.


I’ll be watching “The Bachelor” tonight.