You Need To Do A Cost Analysis


"You Need To Do A Cost Analysis" 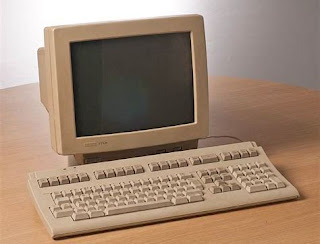 WARNING
The following post relates to my job over thirty years ago and is as boring as shit.  If you are suffering insomnia it is recommended reading.


Back in the computer stone age, I worked for a stock broker in the Stock Exchange order Processing Department.  Everything we worked with was on mainframe computers accessed by “dumb terminals.”  The dumb terminals accessed information and programs from the main frame computers.


Processed information was maintained on tapes and or printouts, not digitally on a computer.  Our firm’s activity on the Exchanges on any day resulted in a paper print out around six feet high.   After a month those printouts were maintained on film.  Records of sales on the exchanges were maintained on printouts piled about 2-foot-high each day, and then also on film.


Researching a problem only a day or two old might take only a few minutes, something older could take an hour, something from weeks back could take most of the day.


When a problem was resolved, it often meant taking copies of reports and mailing them to the branch office which raised the issue.


Sometime in the early 90’s, I was asked to test a PC as a replacement to the dumb terminals.


It did not take me very long to realize that number one, the PC could access multiple applications on multiple windows.  This saved time and made research super easy.


I then learned that we could receive and send messages to branch offices on the computer, and not off a teletype machine sent from a specialist teletype operator.  Further it was determined that we could capture information and save it and access it on the PC from multiple servers.


Research could be done from one station and PC; results could be emailed to the office in seconds.


Within a week I reported that this was technology that we needed to pursue and implement ASAP.


“We’ll need you to do a cost analysis.”


I did not go to graduate school of business.  I barely limped out of college.  Those needing a “cost analysis” were fresh out of smarty town, there was a book and by golly they were going to go by it.


Now I am not knocking the “cost analysis” process.  In the early days of our computer processing requests, we had spent zillions of dollars, often to save hundreds of dollars.


This however was a no brainer.


“So” I said, “if McCormack showed you his reaper which would replace and do the work in one day of one hundred workers in a week, would you need a cost analysis?”


“OK then, 10 PC’s will replace 20 dumb terminals.  The PC’s are $1500 a piece one time, the dumb terminals cost $75 a month each leased from IBM, the leases would last FOREVER.  Research time will be cut in half, requiring less personnel; we can cut paper printed records by about 100 pounds per day and we save about 1000 square feet of storage space.  Besides a night and day improvement in service and accuracy I would calculate the cost savings to be about a large bucket of 100 dollar bills every day.”


“That is not a very professional analysis!”


“Would you do an extensive cost analysis on replacing the horse and buggy with a John Deere Tractor?”


“Then have at it, I did not take cost analysis in school”


I wonder why I never even got to see where they keep the glass ceiling.


It took about 6 months to slowly start replacing stone age technology with new computer technology.  Maybe two years before we eliminated most of the paper.


The most difficult adjustment was teaching people to double-click with a mouse.