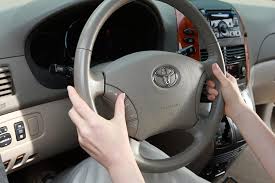 I may have mentioned in a previous post or two that my wife sometimes can be a little…er…strange?  Yeah, strange would be the right word.  Not strange in a bad way, strange in different way.


For instance, she does not scoop pudding with her spoon, she dips the spoon straight down into the pudding, pulls it out and eats whatever sticks to it.  It works, but it does take forever to finish desert.  They may flick the restaurant lights on and off and start stacking the chairs and she is still dipping.


She does not like to walk on a sidewalk.  If she can, she would rather walk in the street.  I have no idea why, she just does.  I remember, “Step on a crack, break your mothers back.”  Apparently, she heard it as “Step on the walk, people will talk.”
Then there is the can not wear glasses thing.  She does not need them for distance or reading, but she will not wear sunglasses or even those 3-D things at the movies.  She will hold them up to her eyes but, "I don't like the way they feel on my nose...it is just weird."  I agree with the weird part.


These are just a few examples of the many things that makes Mrs. C so special, and I don’t mean special in the little yellow bus kind of way, but just well, special in a different kind of way.


I thought I knew all her “special” traits, but today I learned a new one.  Maybe it is just me, but I think this is a little strange…you be the judge.


Today we were driving to the store and she had the Beatles channel on.  She was singing along to “Octopus Garden” obviously enjoying it when suddenly she just changed channels with that little button on the steering wheel.


“I want to be, under the sea, in an octopus…(click) Everyday, it’s a getting closer, going faster than a roller…(click) Down the street, singing doo wah ditty, ditty, dum diddy…(click) And frolicked in the Autumn mist in a land…”


“What the hell are you doing?”


“What the Hell, if you don’t like a song why are you singing along like you are into it?”


“Because I know the lyrics.”


“But you obviously don’t like the lyrics or the song.”


“Sometimes I don’t know I don’t like a song until I sing a little of it.”


That makes zero sense to me.  But then I scoop my pudding, so…