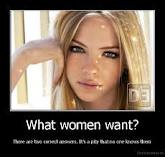 Last week in “P-Whipped” http://joeh-crankyoldman.blogspot.com/2012/01/p-whipped.html I posted the three things men need in order to be happy (Food, shelter, and getting laid on a regular basis).  As a cranky old man, I think I qualify to be an expert on that topic.  This week I am stepping out well beyond my expertise and I am posting on what women want.  Before any women get their panties in a bunch about my unmitigated gall, this post is on what men THINK women want.
Let me repeat that: This post is on what this stupid old man men THINKS women want.
These “What Women Wants” are in no particular order.
Women want NOT to be told “Don’t get your panties in a bunch.”
Women want to be thin.  Every woman I have ever known wanted to lose at least five pounds.  They want to be thin for gay men and other women. Most men are perfectly happy with the extra five pounds on their women.  Why women want to please or impress gay men and other women is a mystery to me.
Women want children.  This is genetic and defies logic; it is a necessary instinct to assure survival of our species.  After childbirth many women have no idea what drove them to having a child.  They complain about how much work a child is, and twelve months later they start to think that one more would be a great idea.
Women, especially women with children want eight hours of sleep a night, they will settle for six.  They are lucky to get four.
Women want someone to take out the garbage.  Women will wash, clean, cook, and change diapers.  Women will even mow lawns and do yard work.  Some women will repair stuff and do carpentry.  No woman will take out the garbage.  I don’t know why.  It is way easier than most other tasks they will do; for some reason women draw the line on taking out the garbage.
Women want a warm set of feet in bed at night.  Once again, I don’t know why, but a hot water bottle will not do, they want a pair of warm feet.
Women want women friends and the time to get together with them.  They do not like their man to get together with other guys, but they have to have their girl’s night out.
Women want anyone to watch over their children from time to time (see women want eight hours of sleep).
Women want someone to listen to them.  They have their women friends; they also want their guy to listen to them.  It is hard for a guy to listen to anything women related for over seven minutes, it is the one thing we learn to fake.  When listening, NEVER NEVER tell a woman how she should feel!
Women want sex on a regular basis. (Interpretation of “regular basis” is often a subject of dispute between men and women.)
Women want to shop.  Men hunt.  Shopping is the new gathering.
Women want shoes.  Women want shoes to match their every outfit; then they want more shoes.  When women have all the shoes they could possibly want, they want more shoes.