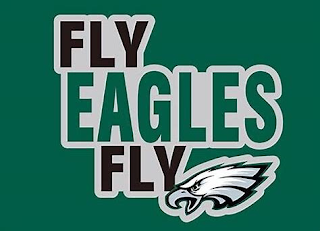 
Sunday they played the Bears in the first of this year’s playoffs.


We watched the game together.  He gets a little bit extra involved.  He does remind me a little of my younger self, only even crazier.


It was a close game through three plus quarters.  In the last quarter the Eagles led 10-9.  Spencer was in a pace-back-and-forth mode most of the game.  The Bears hit a couple of big plays and scored a touchdown with 4 plus minutes in the game taking a 15-10 lead.


“Friggin Eagles, they always lose!  I hate them!”


“They won the Super Bowl last year; besides they still have time to score.”


The Eagles did score.  They had some nice plays and got the ball to the Bear two-yard line.  It took them four plays to get a touchdown.  Four excruciating plays where my son could not contain himself.  He threw stuff, he cursed, he cheered, he cursed.  He kicked stuff, and when they scored it was fist pumps, chest beating and dancing.


The Eagles, leading 16-15, then go for two points which would guarantee a tie if the Bears make a field goal in the remaining 50 seconds.  The Eagles back leaped over the pile and the ball crossed the line for the two points…or did it.  It was ruled it did not.  The replay looked like it did to Eagle fans, it did not to Bear fans.  The ruling was no point; score 16-15 eagles.


“Bull shit, he crossed the line!  Crap, now just watch, the Bears will kick a field goal and we lose, CRAP, CRAP, CRAP!!”


“There are only 45 seconds left and they only have one time out.”


The bears ran back the kickoff to the forty-yard line as the Eagles missed a few easy tackles.


They completed a long pass putting them in field goal range with 30 seconds left.


After they moved the ball ten more yards there were only seconds left and the Bears brought in their kicker for a relatively easy (for the NFL) 43-yard kick.


“I knew it!  Missed tackles, missed coverage, they always do this!!”


“They still have to make the kick.”


The kick was up and good.


“Wait, the Eagles called time out before the kick.”


“Arrrggghhhh! They are just delaying the torture!”


The second try was up.


I think he is back at school for next week’s game.  I’ll be texting him back and forth for that game.  I think it may be easier to watch with him at a distance.