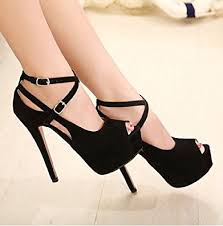 How the Hell do women walk in high heels.  Not those little one-inch things, or those fat librarian shoes, I’m talking about those 5-inch skinny things…I’ve heard them called F-ME pumps, but I would never use that term.


I’d have an easier time learning to walk on stilts.  I saw a lady on a TV show today dancing in those things…DANCING!  It boggles the mind.  It seems no one even thinks twice about the talent it takes just to stay upright in those things.


I know why women wear those heels, they are sexy as Hell.  I’m not sure why, but they are.  I think the idea that a woman would go through so much pain just to be attractive is somehow a turn-on.


I remember back in the stone ages before computers and cell phones, almost all the women wore high heels to work.  I don’t remember any complaining, but women wore them every day and all day, it was kind of a work wear requirement.


In 1980, New York City had a subway strike.  Women who ordinarily walked maybe a block or two to the subway now had to walk miles.  They were not going to walk miles in those heels, they wore sneakers and no one said anything, as wearing sneakers was perfectly understandable given the situation.


When the strike ended, the sneakers stayed.  Women in-mass decided they no longer had to suffer and they began to wear walking or jogging sneakers all day.  Some women still wore heels, but they came to work in sneakers and put on the heels at work.


I used to complain about wearing a tie and having a tight collar, I couldn’t imagine wearing toe pinching 5 inch-heels and making it to lunch time.


The internet claims the Woman’s Liberation movement started in the late 60’s and 70’s.  I think their greatest victory was in the 80’s when comfortable shoes became acceptable.
Posted by joeh at 12:55 PM