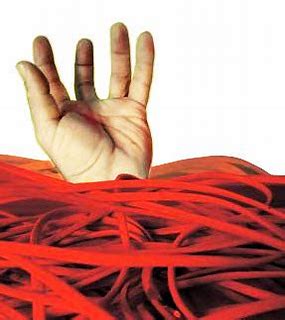 My health insurance is through my old firm as a part of a retirees benefits.  I’m not sure I get any special benefit.  I pay through the nose, but it is convenient and mostly on a par with any other plan that has lets you choose your doctor and does not have ridiculously high deductible and out of pocket expenses.


In order to maintain coverage on my 20 year-old-son, I am required each year to confirm to the plan that he is enrolled in college.  They do not ask for proof, simply check a box on-line that confirms he is enrolled.


This year when I went on-line, they did not like my password.  To get a new password required a five day wait.  I had around 30 days to comply but decided instead of doing it on-line, I would just call.


I called, gave them my “Person Number” (I hate that, could they be any colder?) and some other information and then verified, “Yes, my son is enrolled in school.” I was told I was good to go.


Two days before the deadline to advise that “Yes, my son is still in school” I received a notice that my son’s coverage would expire because I had not verified his enrollment in college.


I called again.  I verified his enrollment again.  They acknowledged that I had called previously and did not know why I had to call again, but everything was now taken care of.


Three days later I received a notice that as I failed to verify my son’s enrollment in college his coverage was terminated.


I called again.  They acknowledged again that they had record (they record calls) of both of my calls, but as the date had passed, I would still have to submit a form to some gobble-de-gook group to dispute the termination of coverage.


I did not like this answer and spoke to a supervisor.  She said she would take care of it as I had clearly complied within the required time.


I called back a week later and was told that, no, I needed to submit a request disputing the coverage termination.


At this point I was more than a little pissed.


Number one, I was not trying to beat anyone out of money, I was paying quite a lot for my son’s coverage.  Number two, I could not find anything in the 2010 Affordable Care Act that required a dependent under 26 to be attending school.


I spoke to a manager complaining that:


“I called and verified my son’s attendance twice and your records confirmed that….”SO JUST FIX IT!!”


“I’m sorry sir, we have specific rules to settle disputes.”


“BTW, How does your plan not comply with the 2010 Affordable Care Act?”


“It states clearly that our plan only covers dependents that are enrolled in college.”


“Your policy just ignores the law and it is as simple as that?”


“Sir, I understand your frustration.”


“You need to fill out a dispute claim, I am sending a form to your address.”


Mrs. C, reacting to the pulsating vein in my temples made a suggestion.


His school does offer coverage.


It is as good or better than the previous coverage that was declined.


It costs less than half of what I have been paying.


I had unknowingly already paid for it this year with his tuition so all I needed to do is have Spencer go on-line and enroll.


I have paid two months of premiums for Spencer’s coverage that the other company declined and have built up a credit.


The money I have saved by the insurance companies screw-up will pay for most of a planned cruise in Hawaii later this year.


I don’t plan to dispute the cancellation of previous coverage.


I am still pissed-off at the incompetence of my Insurance Plan, and wish I could find a way to stick it to them!!!