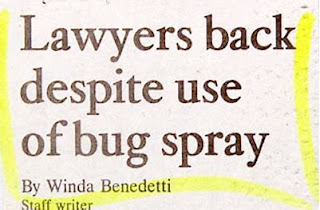 This weeks stupid headlines and my even stupider sometimes sophomoric comments

Burglary suspect nabbed after getaway vehicle gets stuck in large manure pile – He was and still is in deep doo-doo.


81-year-old grandma yanks pythons from grill at request of concerned family – I guess they like their python rare.  I prefer mine non-existant.


Woman dipping chicken finger in soda sparks outrage on social media – It wouldn’t bother me, except it wasn’t her soda!


Florida man shot at woman's home after she wrote bad restaurant review – The food isn’t bad, but apparently the service is awful.


Denver police pursuing former UFC fighter after his latest knockout – Problem is it was in a bar, not a ring.


CBS honcho Les Moonves tried to destroy Janet Jackson's career after Super Bowl 'Nipplegate' – Such a fuss over a friggin nipple!  I remember this halftime; about a dozen people at a party all asking, “Was that her titty?”  “I’m not sure, maybe…get me a beer willya.”


Connecticut mom suffers 'extreme' injuries after lighting dynamite she mistook for candle – At least if wasn’t a 30th birthday party!


Elon Musk says we're probably living in a simulation – I still have trouble with long division.


Oxycontin maker gets patent for drug to treat opioid addiction – They first drug ya, then they mug ya, and now they un-bug ya…all for a price.  Why does fox and chicken coop come to mind?


Good news story of the week:


Firefighters nurse an exhausted Hummingbird back to health – If this does not touch your heart, you have no heart.


https://www.goodnewsnetwork.org/these-firefighters-nursed-an-exhausted-hummingbird-back-to-health/
Come Back Next Week For more
STUPID HEADLINE SUNDAY!