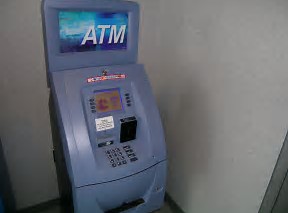 Apparently, the ATM machine recently celebrated its 50th anniversary.  It first appeared in 1967 in London England, so I don’t remember those early machines.  I remember first seeing ATM machines in the 1980’s.  I didn’t use one until 1987.  It was with great trepidation that I trusted this modern marvel to correctly distribute my cash.

When the machine belched out a few twenties, I felt as if I had hit triple cherries, or whatever it is that pays off in Vegas.  I still didn’t trust the machine.  I had heard stories, and if it jammed or something, what do you do, especially when you use one after the bank is closed.
I am a little leery of new technology.  It’s like a new restaurant where food can be mediocre, and service sometimes poor; I want to wait a bit to see what others say, and to let the staff work out any kinks.  So for another few years, I wasted half of every other Saturday morning at the bank to cash my pay check and take out the cash I would need to survive the next two weeks.
Occasionally, I might need a little cash and I would trust the ATM for maybe $20 (there was no charge to use the ATM.) When I moved to a little town with a bank just around the corner from me I gained trust in the ATM and had my check deposited automatically and used the ATM as needed.
I only had one bad experience.
The day of my daughter’s wedding I needed money.  We needed to leave early for a 2-hour drive, so I walked to the bank and withdrew $300 from the ATM.  Except I withdrew a receipt for $300, no money came out of the machine.
Fortunately, the bank was open.  Unfortunately, the bank was busy.  The clock was ticking on my leaving for the wedding, and my impatient, anxiety ridden and unpredictable wife was waiting at home.  I was a block from home, but did not want to leave the bank until I had my money.  I did not have a cell phone in those days so I could not call my wife.  Could I have used a bank phone?  Probably, I didn’t even think of it.
It took a half hour for the bank to check the machine, confirm it owed me $300, and give me the cash.
When I got home, I caught holy Hell and took a wicked tongue lashing for being late.  We made it to the wedding on time, but it was a most unpleasant drive to say the least.  Of course, when we arrived, Mrs. Hyde turned into Dr. Jekyll.  No one knew the trouble I’d seen.
Anyway, that has been my only issue with an ATM.  Today it is hard to believe that I used to stand in line and wander through the bank maze every other Saturday to get cash.
Happy Anniversary ATM.
Posted by joeh at 12:55 AM