YOU HAVE TO PADDLE ON

YOU HAVE TO PADDLE ON 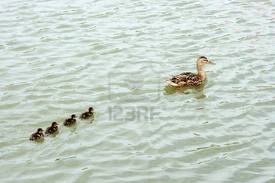 A re-run from August 2012
Mother Nature can be very cruel.  When I was on my honeymoon with Mrs. Cranky almost two years ago I witnessed this fact in all its sad clarity.  It had nothing to do with Mrs. C.; it had to do with a family of ducks.
We were at a lovely resort in the Dominican Republic.  The walk from our room to breakfast each morning passed a decorative pond.  In this pond were a mother duck and five ducklings that were no more than a week old.  I am a bird lover.  I particularly love water fowl.  I spent several minutes each morning observing this momma duck and her babies.
The ducks would paddle all around the pond, momma with the five babies close behind.  I noticed one of the ducklings did not follow so well.  He had some sort of a problem with his foot or leg.  It was a struggle for him to swim as straight or as fast as his brothers and sisters.
The first day or two, momma would notice.  She would let out a quack and slow down a bit until the imperfect duckling could catch up.
On the third day, the ducklings became explorers.  Momma let them roam, still keeping an eye on them.  The imperfect duckling strayed further and further from the pack.  When momma let out a quack he had quite the struggle to catch up.  At some point momma seemed to not give the imperfect duck the same leeway to catch up as she did on previous days.
Momma had four other ducklings to care for.  She had four other ducklings to teach to feed and teach to avoid danger.  It was as if she knew that letting her deformed duckling catch up would endanger the other ducklings.
On the fourth day the little duckling appeared lost.  He could not keep up with his siblings and momma had given up on him.  I don’t know where the ducks retired to at night.  I guess it was a nest hidden away in some reeds or some bushes.  I don’t think the sad little duck with the bad foot found the hideout on the fourth night.
On the fifth day, the day we were to leave the resort, I watched the momma duck and four ducklings.  Momma would quack, count four and then swim off.  The imperfect duckling was nowhere to be found.
A snake, a cat, a large predatory bird, or maybe one of the large lizards that the tourists gawk at so much had caught the duckling.
I figured he would not survive, I was just hoping he would not lose his battle until after we left the island.  I wonder if momma duck was as sad as I was to not count five ducklings that morning.  I am sure she was, but she has been conditioned to expect that some of her flock would not make it.  That is how hard nature can be.
I think back to my mom.  She lost a baby sister.  Her mom and her dad passed before she was a teen.  I remember her showing me pictures of her teen years.  “Oh those were the Taylor twins, handsome boys…they died the next year…flu.  That was Sally Clemons…she caught a bad cough and died.”
Mom had an apparent easy acceptance of death.  Sometimes I thought she was a bit callous, but now I realize that to her death was a way of life.  It wasn’t easy, but it was always there.  You could be sad, but you had to move on, had to get over your losses in order to survive.
Mother Nature can be cruel, but like the mother duck, you have to count to four, quack a few times, and then paddle on.  You have to paddle on for yourself and for the other four.
Posted by joeh at 12:03 AM