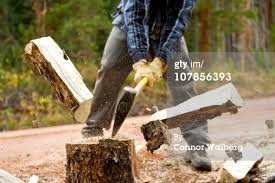 This Cranky re-run is  from September 2014


Whatever; years ago a neighbor gave me some firewood.  He did not have a fireplace and he had just cut down an eighty year old white ash tree on a property he was developing. This neighbor, I called him Big John because he was 6’ 6” and was at one time was the leading scorer for the Seton Hall basketball team, dropped off 35 huge logs into my backyard.  Each log was about four foot across and just the right length for a fireplace.
I left the logs in the back for over a year to season.  They burn better when seasoned and they are also easier to split.  I didn’t know it at the time, but it turns out that white ash is a very good tree for fire wood.  This tree being old was extra dense.  A single log fired up easily and burned forever.  This stuff was like gold for anyone with a wood-burning fireplace.
It was not easy to split.  Even when dried out it was not easy to split.  Each giant log had to be split into four smaller logs which could then be split into two fireplace sized logs.  I split two of the original huge logs every week.  It was good exercise, and good bonding with my seven year old son.
I had not split wood before, but I had seen pictures of it being done.  A big brawny guy takes an axe and with one whack one log becomes two.
Not, I soon found out, with four foot in diameter 80 year old white ash logs.  No, to split these logs it took a maul, two sledge hammers, and multiple wedges.
You start with three wedges through the middle of the four foot wide log and whack them until the big log splits in two, then one wedge to quarter the log, and finally the maul to split the quarters into two fireplace sized logs.
I started the wedges with a little sledge hammer we named “Little Baby.” Once in place a standard sledge “Big Baby” was used to pound the wedges.
Spencer was my helper.
“Spence, hand me ‘Little Baby’ so I can start the wedge.”
“Spence, give me ‘Big Baby’ and watch this split.”
Soon Spencer started the wedges with “Little Baby” which he swung with two hands as I held the wedge delicately in place ready to release it quickly if “Little Baby” was missing its mark.  Fortunately that was not often.  Spence handled “Little Baby” pretty well.
I would then ask for “Big Baby” to pound the wedges in.  When the log was about to split, I would sometimes let Spence do the honors with “Little Baby.”
There is nothing, and I mean nothing as satisfactory as the sight and the sound of a log splitting in half.  It is an adrenaline, testosterone rush! When Spence split a log you could almost see chest hairs grow.


It took a full summer to split all those logs, and two years to burn them.  I would only burn one a night.  They started quickly and kept other logs of lesser quality going.  When I visited people who had a fireplace, I would bring along a log or two instead of a bottle of wine.  Those logs were much prized.
It may look like work splitting wood, and in fact if you did it all day it would be a great deal of work, but for an hour on the weekend it was great exercise, and a great way to bond with a seven year old boy.
I expect some day many years from now, Spence will be splitting wood with his young son. I can hear him now,
“Hand me ‘Little Baby’ let’s get this wedge started.”
Posted by joeh at 12:08 AM